The Haydens - Nicky, Tommy and Roger, From OWB to MotoGP 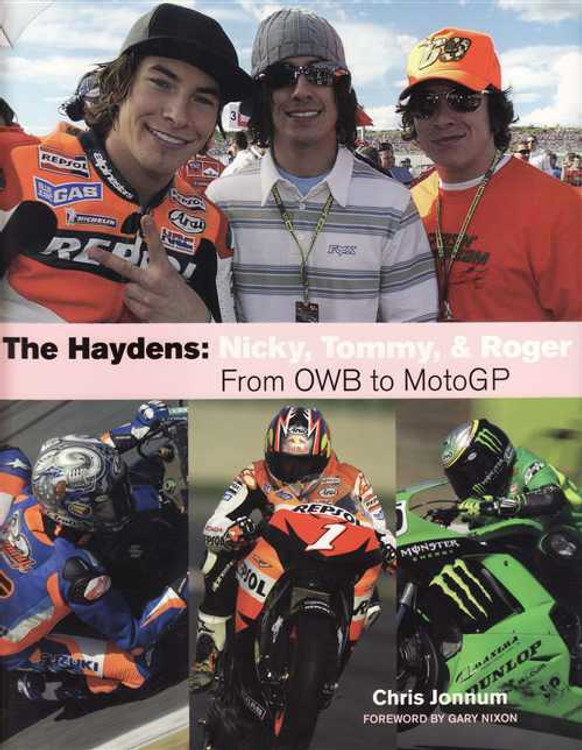 The Haydens - Nicky, Tommy and Roger, From OWB to MotoGP

Nicky, Tommy, and Roger Hayden have been established on the national and international motorcycling scenes for so long that it's hard to recall a time when one of them wasn't competing. That's why it's so fascinating to learn about their earliest days in racing, which built the foundation for the success they enjoy today.

All of the Hayden children began racing motorcycles by age three, and they were soon winning trophies taller than they were. Their parents, Earl and Rose, were avid racers themselves, and they encouraged the boys as well as their daughters, Jenny and Kathleen. On most weekends the family traveled across the Midwest to race on dirt tracks, and as he watched their progress, Earl became convinced his kids had the talent and determination to become professional riders.

A turning point came when champion dirt-track legend Scott Parker advised Earl that if his boys wanted successful careers, their best chance would be in road racing, which enjoyed greater manufacturer involvement and sponsorship. From then on, the family shifted its focus. Tommy and Nicky shared a Yamaha YSR50 before moving up to Honda RS125s with the Moto Liberty team and racing on a national level. Two years later, in 1994, they got their first taste of international competition when they joined Wayne Rainey's squad to race in Spain's Open Ducados series. Tommy was 15 and Nicky was only 12.
After competing in the AMA's 250cc GP and 600cc Supersport classes, Tommy began his professional career in 1997 with Rob Muzzy's Kawasaki team. Nicky followed a year later with Hypercycle Suzuki. In 1999 Roger got his chance at age 16 with Cycle Gear's Suzuki satellite team.

Today racing fans worldwide know the Hayden name, especially after Nicky's amazing run to the 2006 MotoGP World Championship. But The Haydens goes back to the very beginning to tell the entire story of this remarkable family.

Chris Jonnum worked closely with the Hayden family and interviewed dozens of friends, team members, and competitors to weave together an engrossing story of how a family can work together to strive for and realize their goals with one another's help and support.

MSRP:
Now: $99.95
Was:
By: Neil Spalding . Description For years the top class of Grand Prix motorcycle racing was all about prototype 500cc two-strokes, but the need for bike manufacturers to develop four-stroke ideas led...

MSRP:
Now: $49.95
Was:
Get on board for the high octane excitement of the 2014 MotoGP season. Marc Marquez stamped his authority all over the opening rounds as he won ten races on the trot, six of them from pole! It was...

MSRP:
Now: $59.99
Was:
By: Randy Leffingwell, Darwin Holmstrom . Harley-Davidson Book Description Over one hundred years ago a group of resourceful young men with great vision founded the Harley-Davidson Motor Company...

MSRP:
Now: $49.95
Was:
Description The Tour de Corse - one of the most demanding and most popular events on the World Rally Championship schedule. The history of the rally in Corsica is brimming with stories of action,...

MSRP:
Now: $57.50
Was:
By: Carl H. Munroe . Description Introduced in 1960, the aluminum Torqeflite traces its ancestry back to the original cast iron Torqueflite first offered on the 1955 Chrysler Imperial. A version of...

The Race Of Giants DVD

The Best of Sturgis - Custom Harleys In The Black Hills

MSRP:
Now: $79.95
Was:
By: Timothy Remus . Set on the edge of the Black Hills, Sturgis is part party, part vacation and part pilgrimage. For builders of custom Harleys and American V twins, Sturgis is a deadline. Sleep be...