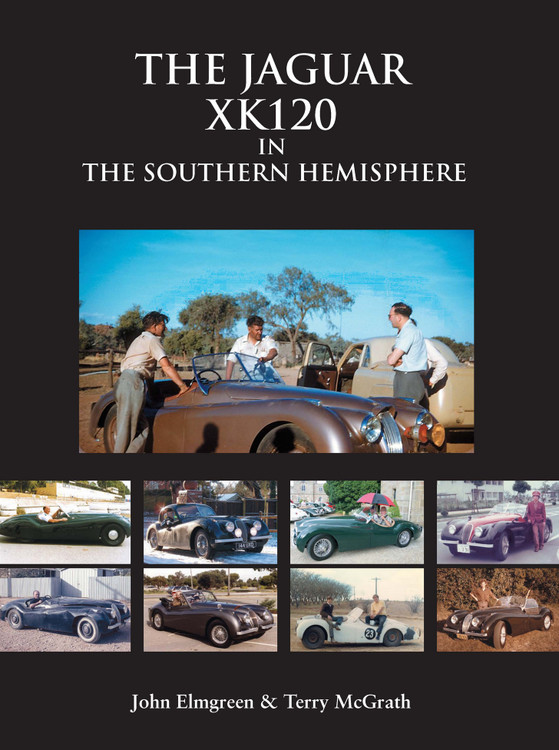 The book sets out the histories, so far as we have been able to ascertain them, of every XK120 Jaguar to have been in the Southern Hemisphere – and, because we are geographically challenged, a few other places as well.

It is 488 pages long, in a large page format (about 25cm x 34cm or 10″ x 13″), contains entries for about 925 separate cars, about 280,000 words, and about 1090 photographs – only some 25 of which appeared in our previous book. It has been printed in full colour. Of course many of the older photographs were originally taken in black and white and remain so, but full colour here means that any photograph that was in colour originally is reproduced in colour, wherever it is in the book – not just a 16 page section in the middle. This was a very costly decision, but one that represented the ‘no compromise’ nature of the project.

The book includes the known histories of no fewer than 55 alloy XK120s. In addition, many XK120s covered are either now or have spent time in parts of the world other than those specifically covered, such as:

USA – 203 cars
UK – 143 cars
Europe – 51 cars.
The new book is a follow-up to our book The Jaguar XK in Australia which was published in 1985. However, as we expanded the boundaries outside Australia, there was too much information to put into one volume for all XKs and therefore we have had to create separate books for each model. The last two books (XK140s and XK150s) will follow in coming years, with the XK140 volume to include racing histories as well.

We have never stopped collecting XK histories but serious work on the current book did not start until 1996. So it has been a long haul over 14 years, not to mention all the earlier work. Many thousands of man hours have been spent. This time could have been spent restoring several XKs…

The book was announced as an edition limited to 1,000 numbered copies (plus a few copies for libraries etc). However, the initial print run has in fact been 750 – of which more than 1/3 were the subject of pre-publication written ‘expressions of interest’.

Chapter 2 – The XK Enthusiast in Australia

Chapter 3 – Import and sale of the XK120 in Australia

MSRP:
Now: $50.00 - $200.00
Was:
Published in 2020 FROM THE AUTHOR: Originally the book was to be a collection of photos but having been associated with the boys from JWF from the very beginning, I felt there was a story here that...

MSRP:
Now: $95.00
Was:
Hardcover, Published in 2020, 160 pages James Hetfield, Metallica's front man, opens up his garage for an exclusive tour of the highlights of his incredible collection of restored and customized...

MSRP:
Now: $360.56
Was:
This book offers an exclusive look at one of the world’s greatest collections of competition cars. During the late 1960s, the success achieved by the Gulf-JW Automotive team fired the...