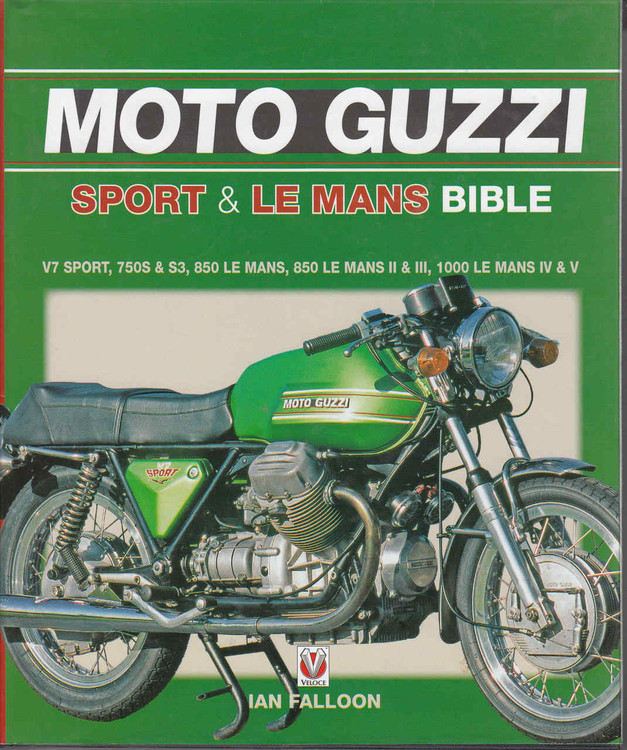 Lino Tonti managed to take the large V7 Moto Guzzi touring engine and create a spectacular sporting motorcycle, the V7 Sport, in 1971. This remarkable machine evolved into the stylistic 850 Le Mans, another landmark Italian motorcycle. Here is a year by year account of development and specification changes of a great series of motorcycles.

The Moto Guzzi V7 Sport and Le Mans are iconic sporting motorcycles of the 1970s and 1980s. They were amongst the first Superbikes to combine Italian style, handling and performance. After struggling to survive during the 1960s, Lino Tonti was given the opportunity to create the V7 Sport Telaio Rosso, in 1971. This was so successful that Moto Guzzi again began to concentrate on building sporting motorcycles. When Alessandro de Tomaso acquired the company the future for Moto Guzzi twins looked bleak until the 850 Le Mans was released in 1975. Like the V7 Sport, the Le Mans was a class leading sporting motorcycle and continued into production throughout the 1980s. After the Le Mans II of 1978, Le Mans III of 1980, the Le Mans IV of 1984, and the Le Mans V of 1988, although no longer a cutting edge sports bike, the final Le Mans successfully managed to combine traditional attributes with modern conveniences. Covering the period 1971-1993 and all models (V7 Sport, 750S, 750S3, 850 Le Mans, 850 Le Mans II, 850 Le Mans III, 1000 Le Mans IV, 1000 Le Mans V) and with description of model development year by year, full production data and 150 photos this is a highly informative book and an essential Bible for enthusiasts.

MSRP:
Now: $50.00
Was:
By: Ian Falloon, 2nd hand book, book in excellent condition, some damage to the dust jacket - small tear, see the images. Racing and production motorycles from 1921 to the present day. The story of...

MSRP:
Now: $50.00
Was:
By: Ian Falloon, 2nd hand book, book in excellent condition, some damage to the dust jacket - small tear, see the images. Racing and production motorycles from 1921 to the present day. The story of...