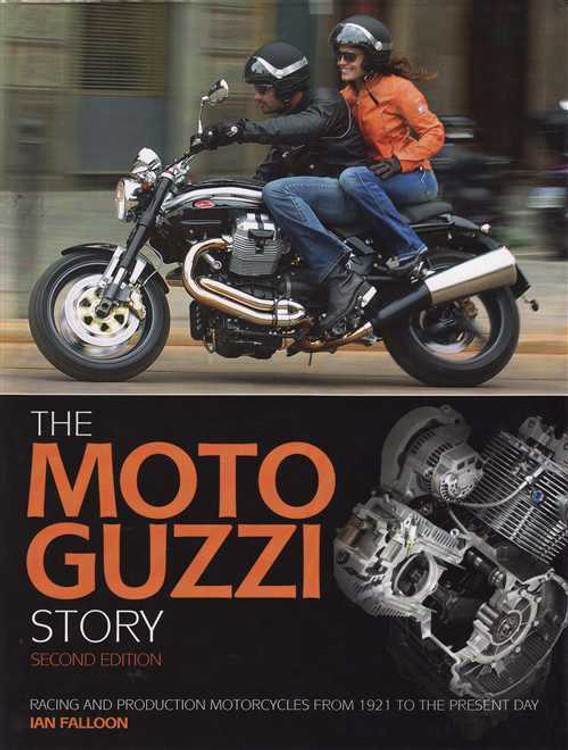 Racing and production motorycles from 1921 to the present day.

The story of Moto Guzzi is one of survival. As one of Italy's oldest and most legendary motorcycle marques, Moto Guzzi rose to the height of success during the 1930s, and again in the 1950s, when they dominated 250 and 350cc Grand Prix racing. The company's withdrawal from racing at the end of 1957 coincided with a period of stagnation, lasting until Moto Guzzi was sold to De Tomaso in 1973. During the 1970s the V7 Sport and Le Mans models were at the forefront of the new Superbike era and, later, with Dr John Wittner's help, Moto Guzzi embraced leading-edge technology with the 1000cc Daytona. In recent years Moto Guzzi has concentrated on touring and custom motorcycles, but with an emphasis on handling and performance.

If one aspect characterises Moto Guzzi, it is continuity. The great 500cc Falcone was in production from 1950 until 1976 and the V7, which originally saw the light of day in 1966, continues today as a 1200 powering a variety of models. This continuity breeds loyalty, and Guzzi owners are a fiercely proud breed. Guzzis are not like other motorcycles, even Italian ones, and to qualify as an owner requires a dedication and individuality that will be rewarded in a long-term relationship. To quote a Cycle magazine test from 1974: 'The Guzzi excels at long exposure, and compared to other motorcycles the drug is slower acting. It comes in time release form.' The same holds true today.

From Carlo Guzzi's Tipo GP of 1921 to the Norge and Stelvio of today, every Moto Guzzi has been unique and charismatic. More recently Moto Guzzi has seen two changes in ownership, and under the umbrella of the Piaggio Group has enjoyed resurgence in style and development. The current range is the most exciting ever offered to Guzzisti and the future for the winged eagle motorcycle from Mandello del Lario looks promising.

With the help of Moto Guzzi staff, past and present, and foremost Guzzi expert Ivar de Gier, leading motorcycle historian Ian Falloon presents a comprehensive history. Every racing and production motorcycle from the birth of the company to the present day is described and analysed. Appendices with complete specifications provide the definitive chronicle of a much-loved marque.