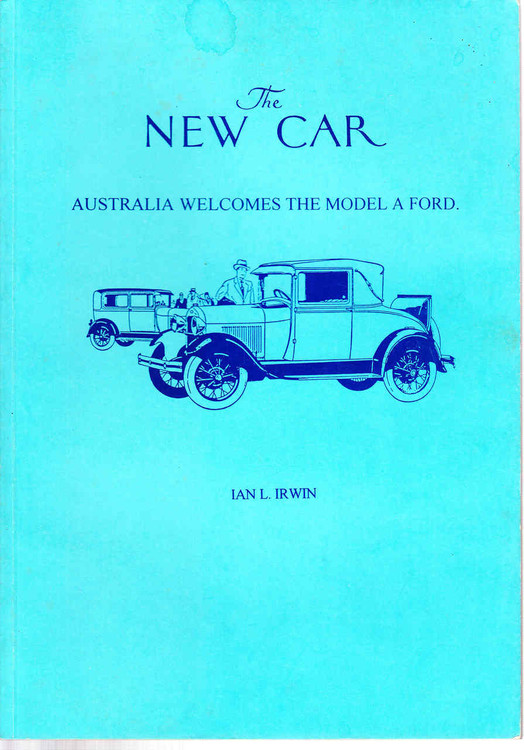 Ian Irwin's fascination with the motor car commenced at a very early age. In the early 1950's, while still in short pants, he attended veteran car events in Sydney, in his home state of New South Wales, before the Veteran Car Club was formed. His first car, in 1958, was a 1930 Model A Roadster, assuredly one of the first Model A's to be restored in Australia.

As a club member for some years, he was concerned that the Model A Fords could be swept up and lost into the conglomerate vintage movement, so in 1969, believing they deserved a club with its own Model A identity, he founded the Model A Restorers' Club (Australia) and in so doing unwittingly commenced what is now the largest nation-wide vintage marque movement in the country.

Ian has been President of both the Model A Restorers' Club (Australia) and the Veteran Car Club of Australia. He has served in other capacities in both of these clubs, and in the Rolls-Royce Owners Club of Australia (ACT). He directed the First Model A National Meet and two other major National Rallies, and the 1988 Australian Bicentennial Castrol World Rally. He was given the Inaugural Life Membership of the Model A Restorers Club in 1972, and on Australia Day in 1990, was decorated with the Order of Australia Medal the first and only Australian to be honoured for services to the enthusiast car movement.

Ian's interest in, and enthusiasm for veteran, vintage and historic cars is extensive, but for him the Model A Ford is certainly one of his favourites. His first book, The Model A Ford, The First Fifty Years, was written in 1978 to commemorate the 50th Anniversary of the Model A Ford. He has developed an extensive personal library, and applied himself to the research of this new work over a number of years, focusing heavily upon rare and obscure contemporary sources. It is his hope that this book successfully documents the compelling story of the release and sale of The New Car in Australia, and serves to fill this gap in the global Model A Ford history.

MSRP:
Now: $99.99
Was:
By: Lindsay Brooke . When Ford Motor Company introduced the Model T in late 1908, company officials knew they had a winner. Ford was already the national sales leader, and the new car was a...

Ford Australia - The Cars and the People That Built Them (paperback)

MSRP:
Now: $79.95
Was:
The untold story of Britain’s oldest car maker Many previously unpublished images from the vaults of Vauxhall A view from the inside that has been untold until now Of interest to the motorcar...

MSRP:
Now: $69.95
Was:
By: Roger Willis . Description 70 years ago, a disciplined force of Nazi paramilitary stormtroopers dedicated to Aryan racial supremacy invaded the Isle of Man to seek victory in the world's toughest...

MSRP:
Now: $79.95
Was:
By: Simon de Burton . First edition of the new definitive annual guide to motorcycles launched worldwide between January and December 2005 100 of the most exciting bikes in production this year,...

MSRP:
Now: $79.95
Was:
By: Simon de Burton . Second edition of the definitive annual guide to all important motorcycles launched worldwide 100 of the most exciting bikes in production in 2006, in every road-going...

MSRP:
Now: $89.95
Was:
By: Simon de Burton . Third edition of the definitive annual guide to all important motorcycles Launched worldwide 100 of the most exciting bikes in production in 2007, in every road-going...