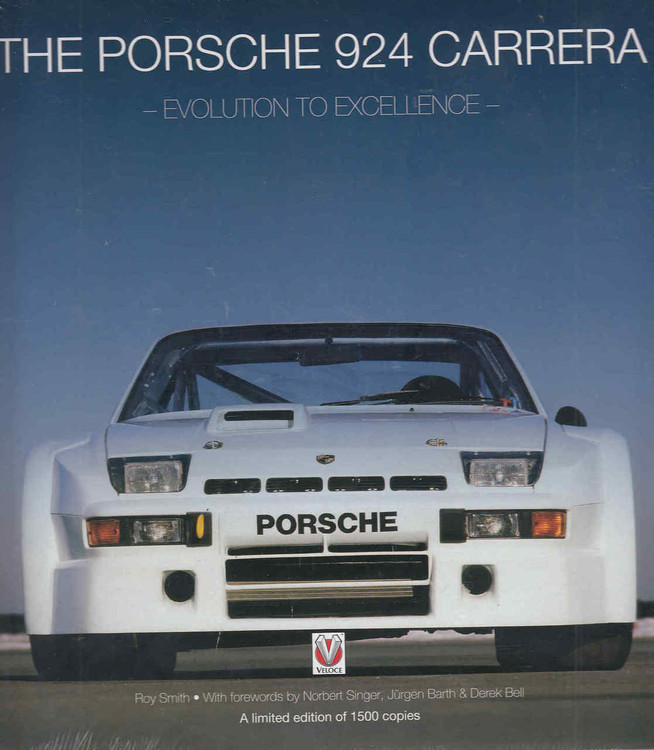 • The first in-depth study of this rare supercar
• Researched in Porsche archive material unopened for years
• Created with the full support of Porsche AG
• Racing statistics and full race stories
• 400 images, many never seen before
• Unique exposé of race component failures
• Full coverage of previously unpublished racing information
• Details of over 200 races in the USA
• Interviews with many of those involved, from both Europe and the USA

The 924 Carrera was widely reported at the time as being one of the greatest of the Porsche ‘specials,’ but has been overshadowed in history by other models. Here, for the first time, is the definitive story of the Porsche 924 Carrera. One of the great supercars of the 1980s, the 924 Carrera was considered by many to have better handling characteristics than Porsche’s flagship 911. The book features interviews with many of those involved with the car at the time, both in Europe and the USA, together with race stories, statistics, and a unique exposé of component failures during racing.

This is the story of an incredible and very rare car. Road tests examined the 210bhp, 150mph road car’s performance, magazines hailed it as one of the greatest Porsche ‘specials,’ and rumour says that the last front-engined models could have threatened the sales of Porsche’s flagship 911, causing the front engined 968 model to be ‘killed off.’ From its early conceptual phase and the 924 Rallye Turbo of 1979, to the prototype 924 GTR/P that tested at the Paul Ricard Circuit and went on to place sixth at Le Mans in 1980, this book records the model’s evolution to excellence, based on extensive research in Porsche AG’s own archives. It covers the 406 Homologation models, built to qualify for Le Mans, and the 59 very special competition models, as well as the 17 GTR racing models. With race details covering Europe and the USA, from the Sports Car Club of America production D racers, to the GTO and Trans Am class 924 GTRs of the mid-80s, this is the first time that the full history of this rare supercar has been told.

Roy Smith is a retired company director with a lifetime passion for motor sport. He began writing in the 1960s for club magazines, recording details of interviews with notables of the time.

A 40-year business career in sales and marketing developed an attention to detail that is crucial to writing a work such as this and his previous works about the development of the first turbo Formula 1 car, the complete history of the Alpine Renault sports prototypes (for which he was awarded the Guild of Motoring Writers Mercedes Benz Prize and the Montagu of Beaulieu Trophy in 2010), a comprehensive study of the racing legend Amédée Gordini and the definitive work on Alpine Renault berlinettes. He has written and continues to write many specialist articles for websites and magazines in the UK, and internationally as a UK historic correspondent.

His aim in this book is, as before, is to record another first in English for future generations: this time the story of a remarkable car overshadowed by the fame of its siblings.
Here we see a change of direction for Roy away from French subjects to a German one with an in-depth study of the 924 Carrera GT, from homolgation special to championship winning rally car and class winner at Le Mans.

MSRP:
Now: $695.00
Was:
By: Karl Ludvigsen, 2nd hand book, excellent like new condition Description The Comprehensive History of the Company, its Cars and its Racing Heritage. Three volume set in slipcase, 1,688 pages, 1854...

MSRP:
Now: $89.95
Was:
By: Tony Dron . When Porsche was establishing its reputation two generations ago, this celebrated company forced the world to think again about the very meaning of the term 'sports car'. Looking good...

MSRP:
Now: $550.00
Was:
By: Jurgen Barth, Gustav Busing . 3 Volumes in Slipcase, new book however there is a small crack on the box, see photos for more details. Written by Porsche insider and Le Mans-winner...

The Race of Champions 2007 DVD

MSRP:
Now: $150.00
Was:
Published by BMW Mobile Tradition, Hardbound, 111 Pages, Published, 2008 - **Very rare BMW issued book in excellent condition** For many, BMW coupes are the epitome of timeless elegance in the world...

The Purple Helmets - On Any Sh*te Sunday DVD