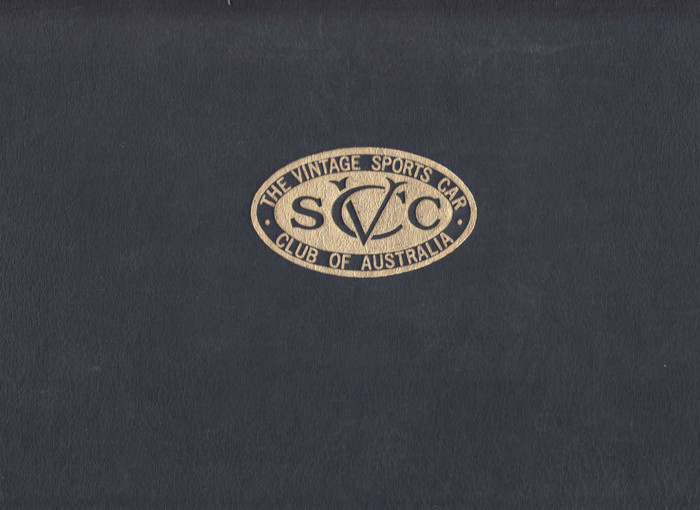 PREFACE
To perpetuate sane of the early history Of the Vintage Sports Car Club of Austral ia, the late Gordon Nicol produced the original of this photographic record.
Gordon was elected President of the V. S.C.C.A. in 1946 during  the clubs formative years and retained office until he moved his business and residence frcyn Rose Bay to Warners Bay in the Newcastle district in 1951.

His profession as an anbidextrous signwriter, his natural good humour, also his love for people and the vintage sports cars he enjoyed to own and drive, led to the artistry expressed in oils frorn his busy brush and the words that frame each leaf of this unique photocopy pictorial chronical of club events, its members and their cars.

1His regular association and friendship with founder manber the late Jack Jeffery caused him to bequeth the Original six photo albums to Jack who later presented them to the V.S.C.C.A., to be held for posterity in the clubs library.

Many of the photographs reproduced were from my camera and his reference in the section allocated to Jack Jeffery of the words Uncle jack and Unca Jacka Jeff were the expressions of my two sons as infants.

The efforts of Gordon Nicol in producing the original albums, symbol ize the energies exerted by many early me-nbers to further the growth of the V.S.C.C.A. and I believe this reproduction will become a reminder of those efforts and a testirnony to present members in their acknowledgement of the past.

MSRP:
Now: $99.50
Was:
By: Neville S. Webb . Prologue It is appropriate that I apologise in advance for the surfeit of the photographs press cutting and data related to my own vehicles included in this "History" Readers...

In Praise Of Veteran & Vintage Cars In Australia

The Vincent H.R.D. in Australia