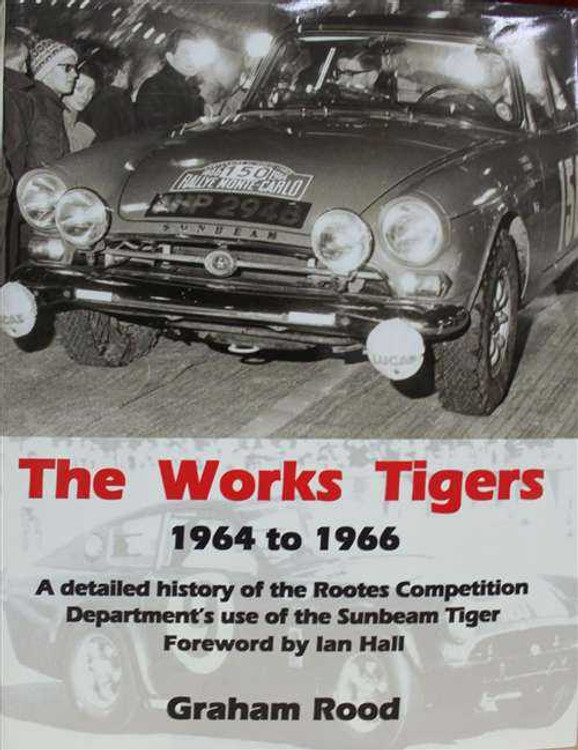 The Tiger played an important part in the history of the Rootes Competition Department and the close-knit team of drivers, navigators, mechanics, engineers and the team managers acquitted themselves well and provided good competition in the principal European rallies of the period.

The use of the Tiger as a front line rally car lasted just under two years, but provided a welcome competition to the established rally cars of the period and particularly the big Healeys in the GT class.

The Tiger was an interesting and, at many times, an exciting car to drive and did as well on ice and snow (Monte Carlo 65) as it did on tarmac (Alpine 65) and in the dust and rocks of the Acropolis.

Over the years there have been a number of books written about Rootes cars that only touch on the competition history of the Tiger, but this book provides an accurate, wide ranging and detailed history of the works Tigers. It covers the early development as a rally car in late 1964 right through to the final rally in 1966 – covering each of the thirteen rallies in detail. It includes the Le Mans effort in June 1964 and the development of the cars for this one-off exercise. Much of the detail in the main text and the appendices - the build of the works cars, FIA homologation details, previously unseen works cars build sheets and a large number of outstanding photographs from both Rootes and other motorsport archives - have come from the Competition Department archives and from the mechanics own notes.

For those owning a Tiger today, and particularly for those currently using it in competition, this is the competition lineage of your Tiger.

MSRP:
Now: $69.95
Was:
By: Brooklands Books . Caroll Shelby, who in 1962 transformed the AC Ace into the Cobra, was contracted the following year to work his magic on Sunbeam's sporting Alpine. The outcome was the Tiger,...

MSRP:
Now: $199.95
Was:
By: Mike Allison, Peter Browning . Description MG is Britain's best-loved sports car and has one of the finest records of achievement in competition events. So it may come as a surprise to learn that...