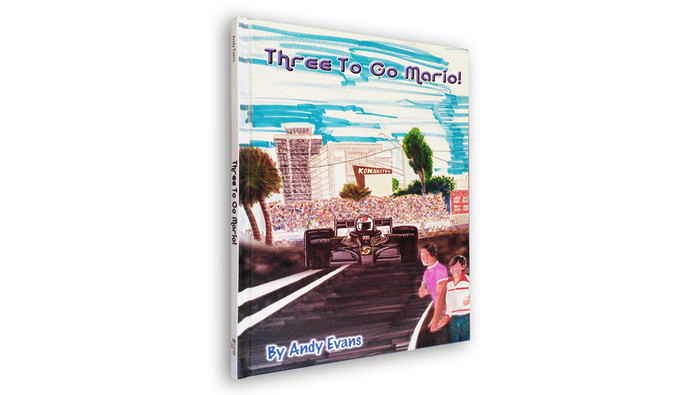 The exciting story of Andretti becoming the first American to win the Grand Prix on home soil.

Specifically written for children, Three To Go Mario! written and illustrated by Andy Evans is the exciting story of his first-hand experience watching Mario Andretti become the first American to win the Grand Prix on his home soil. Driving the revolutionary new Lotus 78 to victory over Niki Lauda in his Ferrari 312 and Jody Scheckter in the Wolf WRI, Andy’s recounting of his own intense feelings during the race and the exciting play-by-play to victory make this a great read for children. Colorfully illustrated, it is a visual masterpiece recalling style and detail from a not so long ago decade.

MSRP:
Now: $80.00
Was:
Jimmy Murphy and the White Duesenberg Murphy’s fantastic victory in the 1921 French Grand Prix with an American-built Duesenberg. Nuvolari and the Alfa Romeo Tazio Nuvolari’s...

An American Racer - Bobby Marshman and the Indianapolis 500 (Michael Argetsinger)

Bridgehampton Racing: From the Streets to the Bridge (Joel E. Finn)

MSRP:
Now: $170.00
Was:
Award-winning author and automotive historian Joel E. Finn, renowned for his expertise on American Road Racing, has provided the first published in-depth analysis of the country’s largest...

MSRP:
Now: $200.00
Was:
Chronicles of the formative years of America’s post-war National Championship, when very brave and very tough young men vied for victory at Indianapolis and a host of dirt ovals, with little...

MSRP:
Now: $250.00
Was:
The life of America’s most popular race driver is the focus of two decades of American Auto Racing and American life in the Great Depression, World War II and the...