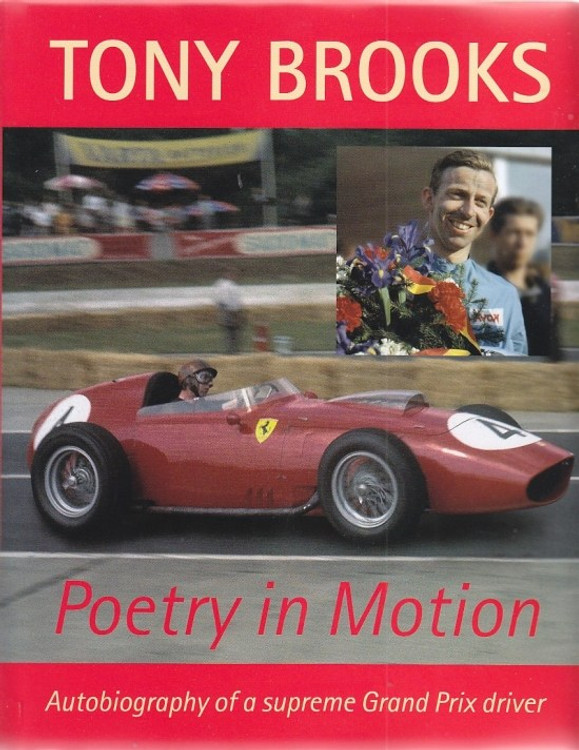 It has taken 15 years of relentless persuasion to convince Tony Brooks that he should write his autobiography. In the 1950s he revealed himself to be one of Britain's foremost grand prix drivers, yet throughout his career he shunned publicity, preferring to let his on-track performances speak for themselves. This is why Sir Stirling Moss, on many occasions his team-mate in Formula One and sports car races, has described him as the greatek little known' driver of all time:

His motor racing career began at Goodwood in 1952 at the wheel of his mother's Healey Silverstone sports car. Three years later, having never previously sat in a Formula One car, he drove a Connaught to victory in the Syracuse Grand Prix, beating the entire Maserati works team at a time when the Italians dominated the sport; it was the first GP victory for a British car and driver for 31 years.

Tony's unique combination of speed and smoothness, which has inspired his choice of Poetry in Motion as the title of his book, was to lead to works drives with Aston Martin, BRM, Vanwall and Ferrari, bringing him Grand Prix and sports car victories on Europe's three most challenging circuits Spa-Francorchamps, the Niirburgring and Monza.

Through his extensive autobiography, he explores in great detail the fundamental differences between the hazardous sport of motor racing in his day with the safety and electronically aided business environment in which Formula One operates today. From an era when death on the track was all too commonplace, he survived two major accidents to complete a career trilogy embracing dentistry, motor racing and the motor business. Now retired, he retains strong links with the sport and is frequently to be seen at major events which honour the history of the sport and its participants.

Doctor on the Grid (Tony Goodwin)

MSRP:
Now: $120.00
Was:
Doctor on the Grid: How Dr Tony Goodwin's Passion for Motor Racing Drove Him to Combine His Medical Career with 463 Race Dr Tony Goodwin's autobiography should be an inspiration for anyone...

MSRP:
Now: $59.95
Was:
Sprintcars 2 is a lavishly illustrated ride on the wild side covering the sport of sprintcar racing in Australia and the USA via the lens of photographer/publisher, Tony Loxley...

MSRP:
Now: $39.95
Was:
By: David Fletcher, David Willey, Mike Hayton .**OCTOBER 2017 REPRINT** Description An insight into the history, development, production and role of the most feared battle tank of the Secon World...