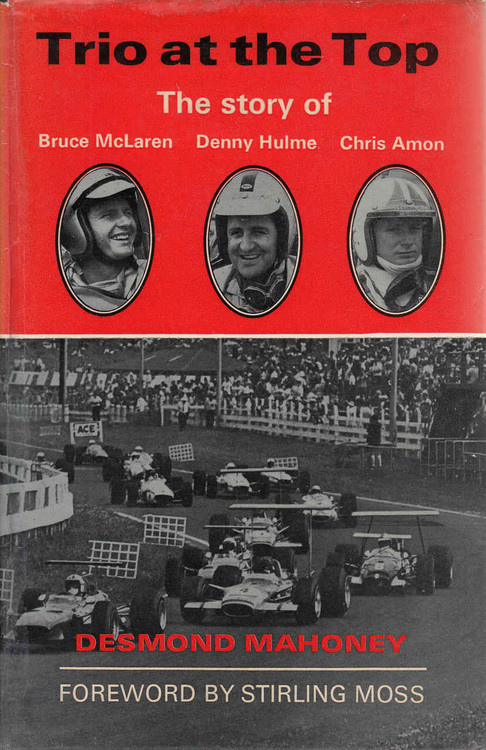 Why should three of the world's top eight or ten drivers be New Zealanders ? Why should one of them already have been world champion, another the outstanding constructor of the world's fastest racing machines — the CanAnn 200 mph-plus sports-racers — the third unquestionably, like the second, championship material ? How could such a combination appear suddenly from a country with less than the population of a large European city ? Will it ever happen again ?

These are some of the questions answered in this book, written by New Zealander Desmond Mahoney, for the past 16 years motoring editor of the Auckland Star, who has known world champion and CanAm champion Denis Hulme, CanAm champion and constructor Bruce McLaren, Tasman champion, Ferrari and March No. 1 Chris Amon from the beginnings of their careers.

In a foreword to the book, Stirling Moss says: "There are two reasons why I'm specially pleased to be writing a foreword to this book. The first is that the writer is an old friend of mine. The second is that the subject it covers is an important one for the sport.

"People are fond of talking about the 10-year British domination of Grand Prix racing, when that isn't what they really mean at all. Out of the 10 world championship series since 1959, only five have been won by British drivers and one by an American, Phil Hill ... and the remaining four by drivers from Australia and New Zealand. In terms of its population, New Zealand's contribution to the top echelons of motor sport far outweighs that of any other country."

The fascinating background to the lives of these drivers, with their differences and their similarities, the story of how motor racing on a big scale has evolved at the other end of the world from Europe, and the stories of many other gifted drivers who have not reached the world's headlines — these are all recounted in this book.

Desmond Mahoney was born and educated in New Zealand and has been in daily journalism since 1937. He was joint editor of a small daily newspaper by 1940 and editor of another (after war service) in 1944. He joined the Evening Post (Wellington). in 1949 as a senior
staff member, moving to the Auckland Star in 1954. He won the competitive Imperial Relations Trust bursary for a year's study in Britain through 1955.

For the past twenty-one years he has been successively music critic of these newspapers, and for sixteen years also motoring editor of the Auckland Star.

Married and with four children, Mr Mahoney was earlier a pianist and organist, played tennis, cricket, and golf to a low handicap. Recreations today include golf, motoring, caravanning, listening to music, lying in the sun — and his work.

Memories Of The Bear - A Biography Of Denny Hulme (Eoin Young)

Travelling With The VW Bus & Camper

MSRP:
Now: $62.50
Was:
By: Max Ellery . Description This transmission repair and maintenance manual has been published tohelp provide Holden owners and enthusiasts with an invaluable, comprehensive and thorough guide in...