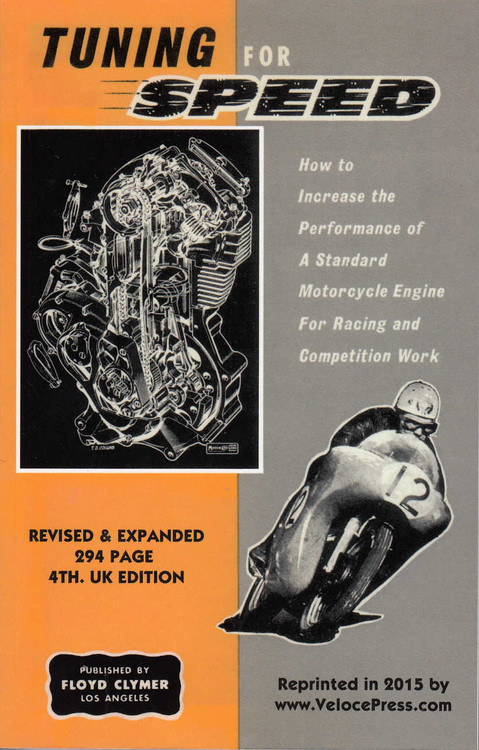 publications are identical in content and contain 294 pages, a significant increase from the previous 208 page 1960 printing.

With a total of 294 pages, the revised and expanded UK edition is the most comprehensive of all of the 'Tuning for Speed' editions ever published. Earlier editions only stretched to 208 pages and later editions shrunk to 260 pages (or less) as what was thought to be 'dated information' was deleted from the contents. This 'dated information' is considered valuable today by those enthusiasts interested in vintage motorcycle tuning and modification. Consequently, this makes the revised UK publication the most complete and desirable edition. Therefore, it is our pleasure to offer this reprint of the Floyd Clymer 'Revised 4th' UK Edition or Second American Edition of 'Tuning for Speed' to motorcycle enthusiasts worldwide.

'Tuning for Speed' was originally published in 1948 and continuously reprinted and updated in order to keep pace with the constantly evolving range of British motorcycles and engines. While the primary focus of this publication is on 1965 and prior British motorcycles, the theory and engineering it contains is still applicable to the current crop of high revving imports. 'Tuning for Speed' is considered by many knowledgeable motorcycle enthusiasts to be one of the best books ever written on how to improve, modify and fine tune a motorcycle engine and it is often referred to as one of the 'toplO' classic motorcycle books.

The Floyd Clymer association with this publication dates back to the early 1960's when he purchased the United States Publishing rights for 'Tuning for Speed' from Temple Press in the UK and in 1967 Clymer published the 1 st American edition of that title. However, by 1967, the Clymer publication had been preceded by 8 printings of the UK edition and was incorrectly identified by Clymer as a 9th edition. In fact, the 1967 Clymer publication is actually a reprint of the less desirable 208 page 1960 UK edition.

However, in 1963, the 4t' UK edition was revised and expanded to 294 pages (with a second identical re-print in 1965). Therefore, this 2nd American edition of the Floyd Clymer publication of 'Tuning for Speed' includes all of that valuable 'dated information' that was deleted from the
later editions and is identical in all respects to the 294 page1963/1965 revised and expanded 4th UK edition - with the exception that 7 pages of UK-based advertising to the rear of the book are not included in the Clymer publication.

MSRP:
Now: $54.95
Was:
By: David Vizard . The A Series engine first became available in 1952 when installed in the Austin A30 but later came to prominence as the power plant for the Morris is Minor. The engine was...

MSRP:
Now: $69.99
Was:
By: John Gunnell . Like the innovation used by Ford's founder, Henry Ford, this fourth edition of Standard Catalog of Ford has been updated, restyled and customized with today's collector, restorer...

MSRP:
Now: $54.95
Was:
By: David Vizard . The A Series engine first became available in 1952 when installed in the Austin A30 but later came to prominence as the power plant for the Morris is Minor. The engine was...

MSRP:
Now: $139.00
Was:
By: Rellim . The Rellim Tune-up and Lubrication Chart is fully updated and revised with each new edition. Covering models over the past 25 years, the Rellim Chart is the most up-to-date information...

Tuning And Preparation of E Type Cars For Competition Use

MSRP:
Now: $39.95
Was:
By: Factory . This booklet is intended as a guide for owners of Jaguar "E" Type models who, in addition to normal road use, may wish to use their cars on occasions for racing, it being understood...