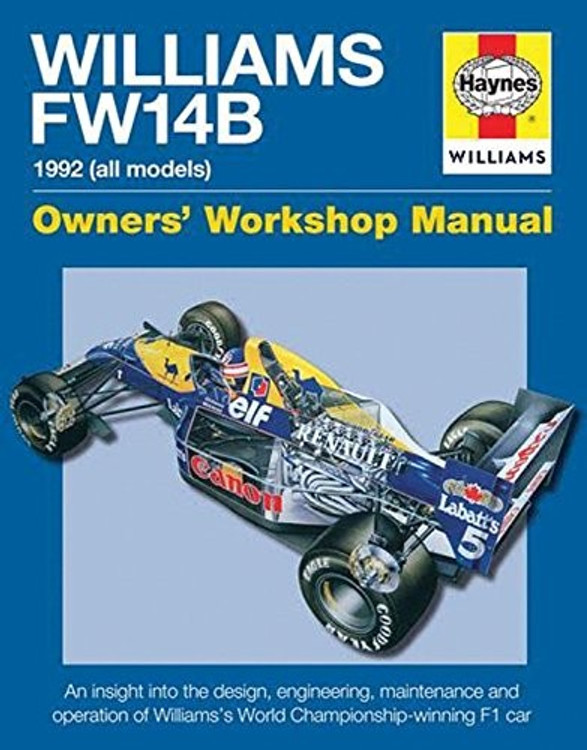 The Williams 1W14B dominated the 1992 Formula 1 season, taking Nigel Mansell to the Drivers' World Championship and Williams to the constructors' title.
The Renault V10-powered FW14B was one of the most technologically advanced Fl cars ever built, featuring semiautomatic transmission, active suspension and traction control, in addition to other innovations.
Written with the full cooperation of Williams, and featuring extensive input from the engineers and drivers who developed the car and took it to championship success, this Manual includes numerous period photographs, in addition to detailed images of an FW14B in the Williams Heritage workshop today.

A wealth of previously unpublished archive material, including original technical drawings and team documentation, provides fascinating new insight into the design and development of the FW14B.
The absorbing story of an tonic Fl car, designed and raced in an era that saw the dawn of electronic control systems in rnotorsport, and when the regulations allowed a talented group of engineers free reign to exploit their innovative ideas and technical prowess.

Why Not ? The Story of The Honourable Charles Stewart Rolls

Who is Britain's Best All - Round motorcyclist of 2005? DVD

MSRP:
Now: $79.95
Was:
By: Karl Ludvigsen . It was no small leap for Porsche from its giant-killing Spyders to the powerful Type 917 that swept all before it. The gap was bridged by its 900-series sports- racing cars, here...

Wolseley - A Saga Of The Motor Industry

MSRP:
Now: $75.00
Was:
The McLaren MP4/4 is the iconic Honda V6 turbo-powered F1 car built by McLaren for the 1988 grand prix season, driven by Ayrton Senna and Alain Prost. Remarkably, the car won all but one race during...