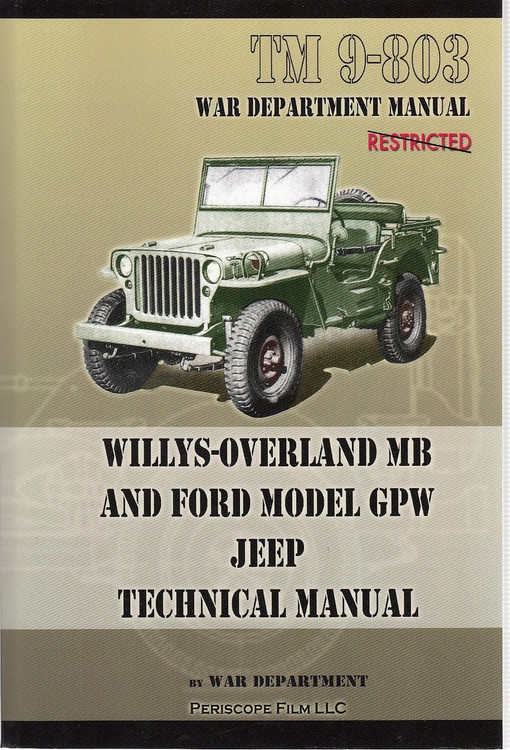 Designated as a light truck, the Jeep was the primary four-wheel drive vehicle for the U.S. Army during WWII. The Jeep's design owed a great deal to Karl Probst, a freelance designer employed by. the American Bantam Car Co. Probst's prototype "Blitz Buggy' was built in a mere 49 days. It clearly impressec! the Army in head-to-head competition against a design submitted by Willys-Overland. However the Buggy's engine tailed to meet requirements, and the Army determined that Bantam could not produce the vehicle in quantity. As a result, the Army bought the Bantam design and asked both Willys and Ford to improve it. The Willys model MB, equipped with a L134 straight-4 "Go Devil" engine, was eventually accepted as the standard. Ford models built to Willys specifications were designated GPW ("G" for government vehicle, "P" designating the 80" wheelbase, and "W" indicating the Willys engine design). (Notably, the "GP" part of the designation is often misinterpreted to mean "General Purpose", and some have suggested this is the reason the vehicle was nick-named the "Jeep". In reality it was probably named after a character in the Popeye cartoons).

Roughly 640,000 Jeeps were built during WWII by Ford and Willys, and used on every front. Utilitarian, rugged, and easy to maintain, Jeeps saw service as scout cars, ambulances, firefighting vehicles, as tractors for artillery, and more. The vehicle so impressed war correspondent Ernie Pyle that he called it one of the "two most important pieces of non-combat equipment ever developed" — the other being the pocket stove. Jeeps remained in service for the U.S. military
in Korea and in the Vietnam War.

Created in 1944, this technical manual reveals a great deal about the Jeep's design and capabilities. Intended as a manual for those charged with operation and maintenance, this manual shows many aspects of its engine, cooling, power, drive train and other systems. Originally labeled restricted, this manual was declassified long ago and is here reprinted in book form. Care has been taken to preserve the integrity of the text.

MSRP:
Now: $49.99
Was:
By: Graham Scott . Two generations ago Spitfires and Messerschmitts were dogfighting in the Battle of Britain. At the same time on the other side of the Atlantic, the Jeep was conceived as an...

Why Not ? The Story of The Honourable Charles Stewart Rolls