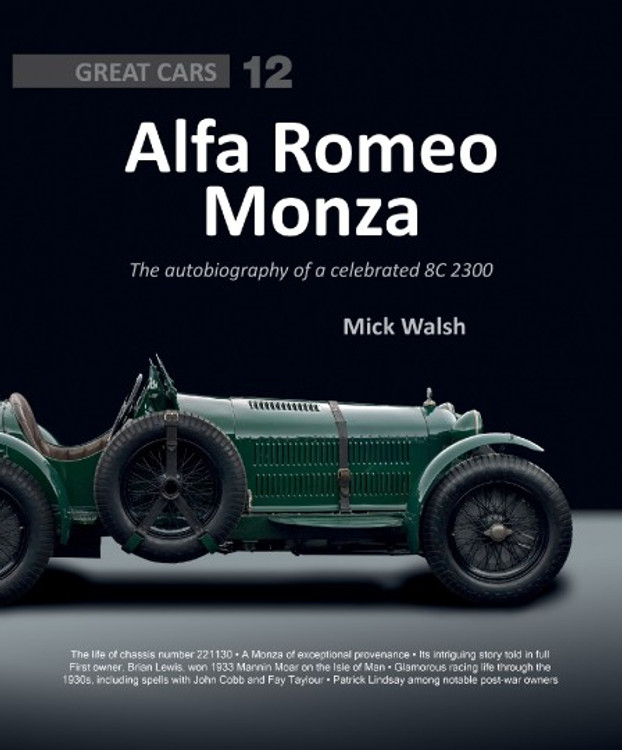 This book tells the remarkable history of an Alfa Romeo Monza and its characterful drivers and owners, some with life stories worthy of a movie script. Built in 1933, ‘221130’ was raced that year by the Hon Brian Lewis and won the arduous Mannin Moar race on the Isle of Man. The car continued to be raced until the war by John Cobb (1934), Luis Fontes (1935), Anthony Powys-Lybbe (1936–37) and Fay Taylour (1938), at venues as diverse as Vila Real (Portugal) and Phoenix Park (Ireland). Postwar, it passed through several significant collectors to arrive at its status today as one of the more important surviving Monzas, and a car with so much charisma and historic interest that it is a most worthy addition to the acclaimed ‘Great Cars’ series. The author Mick Walsh’s passion for Alfa Romeo 8Cs was sparked aged 10, when the Hon. Patrick Lindsay, driving ‘221130’, blasted past his father’s car en route to VSCC Silverstone in 1967. As the long-serving Editor-in-Chief of Classic & Sports Car, Mick has driven and written about many great 8Cs, including co-driving a Touring Spider on the Monte Carlo Rallye Historique and testing a Monza in the Alps after the Klausen hillclimb. As organiser of the Louis Vuitton Concours and the Cartier Style et Luxe, he has created two 8C tributes where ‘221130’ was among the winners. Key content • The 1933 season with the Hon Brian Lewis, including wins on début at Brooklands and in its next race, the Mannin Moar, plus sixth place in the Nice Grand Prix. • Bought in 1934 by John Cobb (later to become notable for speed record-breaking on land and water) and raced both by him and Charlie Dodson, who finished second in the Mannin Moar. • Another new owner for 1935, Luis Fontes (something of a ‘wild man’ who also raced aeroplanes) took the car back to the Mannin Moar, where he finished third, and won the Limerick Grand Prix. • The period with Anthony Powys-Lybbe (a fascinating character who was extensively involved with Alfa Romeos) brought more good results, especially in Ireland, with second places in the Cork Grand Prix in 1936 and 1937. • More racing at Brooklands in 1938 with Fay Taylour (a champion speedway rider whose Fascist links led to her internment during the Second World War). • Post-war, a succession of notable owners included Peter Hampton, the Hon. Patrick Lindsay and Hubert Fabri, all passionate collectors and men of significance. • Nearly 300 period photographs, many previously unpublished, supported by a portfolio of commissioned special photography at Brooklands.

Alfa Romeo - All The Cars

MSRP:
Now: $49.95
Was:
By: Brooklands Books . When the Alfa Spider was introduced to the UK in 1966, there were many rival sportscars. Twenty-four years later the Spider was still in production. Starting with a 1600...

MSRP:
Now: $59.95
Was:
By: Brooklands Books . Combine one of Pininfarina's most enduring shapes with a classic twin-cam Alfa Romeo engine, and you have the Spider. In spite of several updates to keep it abreast of the...

MSRP:
Now: $49.95
Was:
By: Brooklands Books . Alfa Romeos have generally been regarded as sporting cars, whether having two doors or four. The tradition dated back to the early days of the marque but in the inter war...

MSRP:
Now: $89.95
Was:
By: Brooklands Books . When the Alfa Spider was introduced to the UK in 1966 there were many rival sportscars. Twenty-four years later the Spider was still in production. Starting with a 1600 engine...

MSRP:
Now: $99.95
Was:
By: John Tipler . While the Italian motor industry produces many fine saloons, it is their glamorous sports cars that grab the attention. Few cars illustrate this point better than the Alfa Romeo...