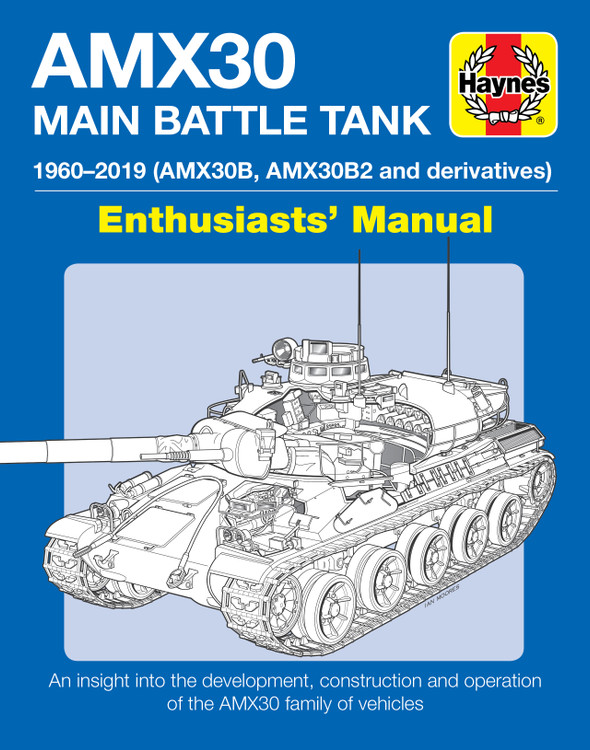 The AMX30 Char de Bataille was the standard French Main Battle Tank during the Cold War era. Initially the French and Germans attempted to develop a ‘standard European tank’ based on their experiences of the Second World War. Both countries required a design that put mobility and firepower foremost at the expense of armour protection, but the joint collaboration failed to materialise with the result that the French produced the AMX30 and the Germans the Leopard 1., The AMX30 was considerably lighter than its Anglo-Saxon contemporaries with a combat weight of 36 tonnes (hence its designation of AMX30). Again, unlike its NATO contemporaries that were armed with the British 105mm L7 gun, the AMX30 featured a smoothbore 105mm main armament firing a single type hollow-charge projectile – the OBUS-G – capable of defeating other battle tanks at normal combat ranges., Authors, M.P. Robinson is the author a number of books and magazine features about armoured vehicles and armoured warfare. The AMX30 family is his special interest. He lives in Toronto, Canada., Colonel Thomas Seignon is a serving officer in the Armour branch of the French Army. He has contributed feature articles to many specialist magazines and is the author of several books on armoured vehicles. He is a member of the French Tank Museum Board and Scientific Council. Thomas lives in Saumur in the Loire valley.

MSRP:
Now: $69.95
Was:
By: Jonathan Harvey . The Volkswagen Beetle is a legend, the definitive motoring icon which consistently ranks as one of the greatest cars of all time. Its instantly recognisable shape and simple...

MSRP:
Now: $69.95
Was:
By: Martyn Morgan Jones . Description The first Capri that the author ever saw was a brand new metallic gold 1600GT XLR. Even parked up, it looked as if it was doing 100mph! The thrusting bonnet,...

MSRP:
Now: $54.95
Was:
The British Army's Challenger 2 tank is based on Challenger 1 that served with distinction in the 1st Gulf War and the Balkans. Challenger 2 is greatly superior to its predecessor with second...

MSRP:
Now: $45.00
Was:
Paperback, published in 2020 The MG Z cars were produced at a pivotal time when the MG Rover Group separated from their previous owners BMW and stood alone in the highly competitive mass car market...