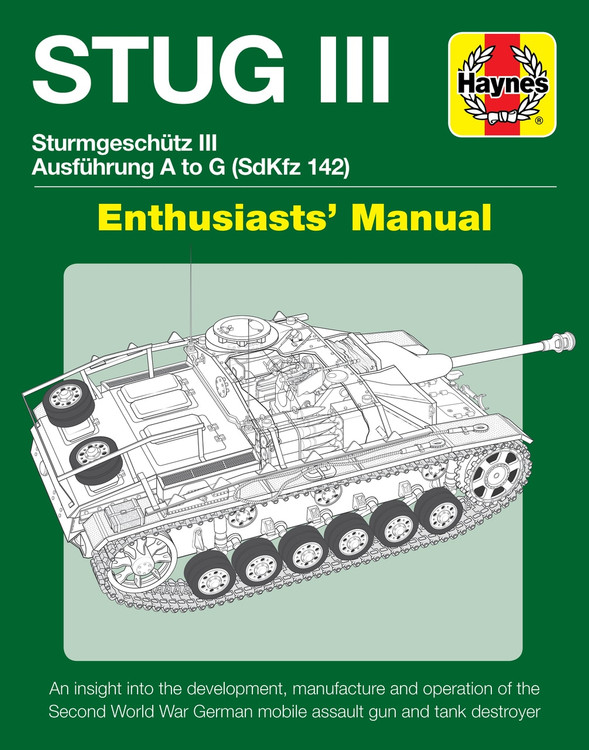 The German Sturmgeschütz series of assault guns was a successful and cost-effective range of armoured fighting vehicles, of which some 10,000 were built during the Second World War. Based on the chassis of the Panzer III tank, the turret was replaced by an armoured fixed superstructure fitted with a more powerful 7.5cm StuK 40 L/48 gun. Originally intended as a mobile assault weapon for infantry support, the StuG was constantly modified and saw extensive use on all battlefronts as an assault gun and tank destroyer. Its fixed superstructure with limited-traverse mounting for the main armament was simpler and cheaper to build than the turret of the battle tank, plus its low height meant it was easy to camouflage and conceal. Towards the end of the war, more StuGs were built than tanks.

StuGs also saw combat when used by several Axis allies, notably Romania and Finland; they were also exported TO Bulgaria, Hungary, Italy, and Spain. The Soviet Union gave some of their captured German vehicles to Syria in the 1950s, which continued to use them up until the War over Water against Israel in the mid-1960s. By the time of the Arab-Israeli Six-Day War in 1967, all of them had been either destroyed, stripped for spare parts, or emplaced on the Golan Heights as static pillboxes.

Author: Mark Healy is the author of the Haynes T-34 Tank and Panther Tank Manuals as well as Midway 1942, The Tiger Tank Story and Zitadelle: The German Offensive against the Kursk Salient 14-17 July 1943. He also produced the best-selling video series Die Deutschen Panzer. He lives in Dorset.

MSRP:
Now: $89.95
Was:
By: Jonathan Wood . The Transporter is without doubt the classic Volkswagen of the moment. This is in no small part due to its rare combination of longevity and versatility that has endeared it to...

MSRP:
Now: $69.95
Was:
By: Jonathan Harvey . The Volkswagen Beetle is a legend, the definitive motoring icon which consistently ranks as one of the greatest cars of all time. Its instantly recognisable shape and simple...

MSRP:
Now: $69.95
Was:
By: Martyn Morgan Jones . Description The first Capri that the author ever saw was a brand new metallic gold 1600GT XLR. Even parked up, it looked as if it was doing 100mph! The thrusting bonnet,...

MSRP:
Now: $89.95
Was:
By: Alastair Clements . Description Few cars of the past 20 years have been taken into the hearts of enthusiasts quite like the Lotus Elise. Innovative in its extruded and bonded aluminium...

MSRP:
Now: $59.95
Was:
The AMX30 Char de Bataille was the standard French Main Battle Tank during the Cold War era. Initially the French and Germans attempted to develop a ‘standard European tank’ based on...

MSRP:
Now: $54.95
Was:
The discovery and widespread use of penicillin in the Second World War was a major turning point in 20th century combat medicine. It led to further enormous changes in the way wounded soldiers were...

MSRP:
Now: $19.95
Was:
Here we have the story of a firm which built vehicles for over a century. Studebaker was the leading maker of horse-drawn wagons and carriages in 19th century America. Turning to motor vehicles in...