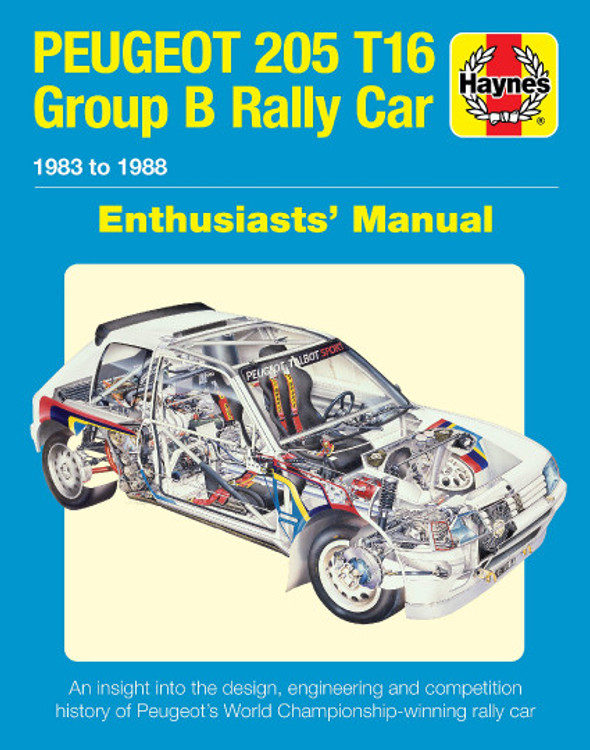 The Peugeot 205 T16 is the legendary Group B turbocharged four-wheel-drive rally car produced by Peugeot between 1984 and 1986. 205 T16s won 16 World Championship rallies between 1984 and 1986 in the hands of Ari Vatanen, Timo Salonen, Juha Kankkunen and Bruno Saby, and lifted both the manufacturers' and drivers' titles in 1985 and 1986 in the hands of Timon Salonen and Juha Kankkunen respectively, against strong opposition from Audi, Lancia, Ford and Austin-Rover. The car was used to extraordinary effect by Peugeot as a marketing tool for the 205 road car, and the project lifted Peugeot to become a mainstream manufacturer to rival the established brands worldwide. The original 205 T16 appeared on the rally stages in 1984, while the revised 'E2' was introduced partway through 1985. The 'E2' incorfporated various revisions, including uprated turbocharger and revised chassis and transmission, raising power output to 550bhp. After the cancellation of Group B at the end of 1986, Peugeot modified three 205 T16 cars to compete in the famous Pikes Peak Hillclimb, and later cars were modified to compete in the Paris-Dakar rally, winning in 1987 and 1988, and the car also formed the basis of the '405 T16', which won the Paris-Daker for Peugeot in 1989 and 1990. Following a number of accidents during 1986, Group B cars were banned from the end of the 1986 season, and the 205 T16's swansong would be competing in the Paris-Dakar rally and, later, rallycross events. Today, the appearance of 205 T16s is always eagerly anticipated at historic rally events, and motorsport retrospectives such as the Goodwood Festival of Speed. This manual chronicles the design, anatomy and operation of the 205 T16, with input from many of the drivers and engineers involved.

MSRP:
Now: $54.95
Was:
The original rally Quattro debuted in 1980, and was very much based on the road-car versions of the car, but with a highly tuned 300bhp engine. In 1981, Audi Quattro works driver Michele Mouton...

MSRP:
Now: $179.95
Was:
A proven content presented in a new guise: The new edition of this standard work comes in the smaller format of 24.5 x 30cms and with just one language per book. This gave the authors Reinhard Klein...