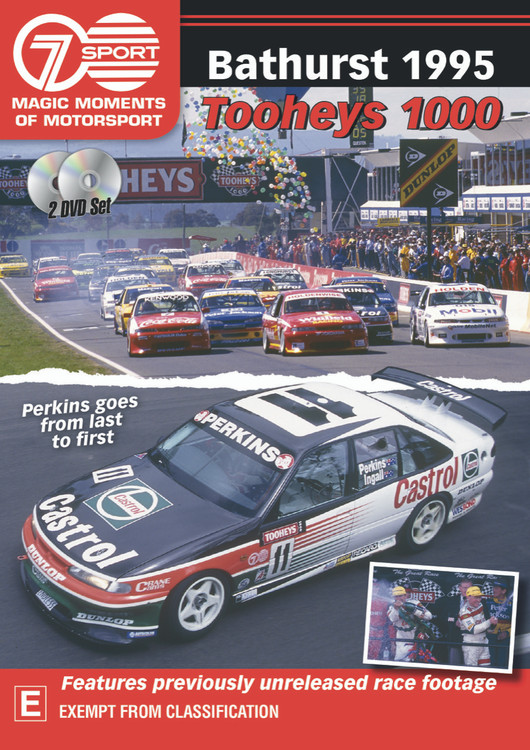 THE 1995 Tooheys 1000 at Mount Panorama, Bathurst remains a special race in the history of ‘The Great Race’ with the Seven Sport race day telecast released here for the first time as part of the popular Seven Sport’s Magic Moments of Motorsport DVD series.

That year’s race was the 33rd running of the annual October classic and the first time in its history it was run exclusively for Holden and Ford V8s.

History shows that Castrol Commodore aces Larry Perkins and Russell Ingall swept to a wildly popular victory, overcoming a first lap pit stop to replace a tyre punctured within seconds of the start of the race due to contact with poleman Craig Lowndes.

Perkins pounced to take the lead with just nine laps to go as leader Glenn Seton slowed due to engine problems. The Holden driver swept by as the Ford driver – dubbed the best racer to never win ‘The Great Race’ – was then forced to sit and on helplessly as victory slipped through his fingers.

This race is a Bathurst classic, run at breakneck speed with the best touring car stars of the day going head-to-head on a fine, sunny Mountain day.

Included on this release is the Suzuki Cup support race and the full 161-lap Mountain classic held on Sunday October 1, 1995.

This release also includes a range of unseen vision too. We have included on this DVD the race action that unfolded while television viewers of the day were busy watching commercials!

This DVD is a must-have for your collection of Seven Sport Magic Moments of Motorsport titles, celebrating a brilliant era of racing at Bathurst.

MSRP:
Now: $39.95
Was:
Holden’s lion reclaims the Mountain! THE 1990 Tooheys 1000 at Mount Panorama, Bathurst remains a special race in the hearts of Holden fans and now, for the very first time, the full Seven Sport...

MSRP:
Now: $39.95
Was:
odzilla dominates at Bathurst THE 1991 Tooheys 1000 at Mount Panorama, Bathurst was run in race record time with victory to Nissan’s Jim Richards and Mark Skaife – now, for the very first...

MSRP:
Now: $20.00
Was:
Cavallino The Journal Of Ferrari History Number 245 Oct / November 2021 The most enduring and collectable journal on Ferrari in the market for well over three decades !

MSRP:
Now: $85.00
Was:
First produced in 1928, Mercedes-Benz Coupés became the embodiment of elegance and exclusivity on four wheels. Their design became an experience for all the senses, appealing to every emotion...

MSRP:
Now: $100.00
Was:
Saab has gone, but its cars and its loyal band of owners remain. In this photographic album, internationally known Saab author and commentator Lance Cole celebrates all things Saab.In a collection of...