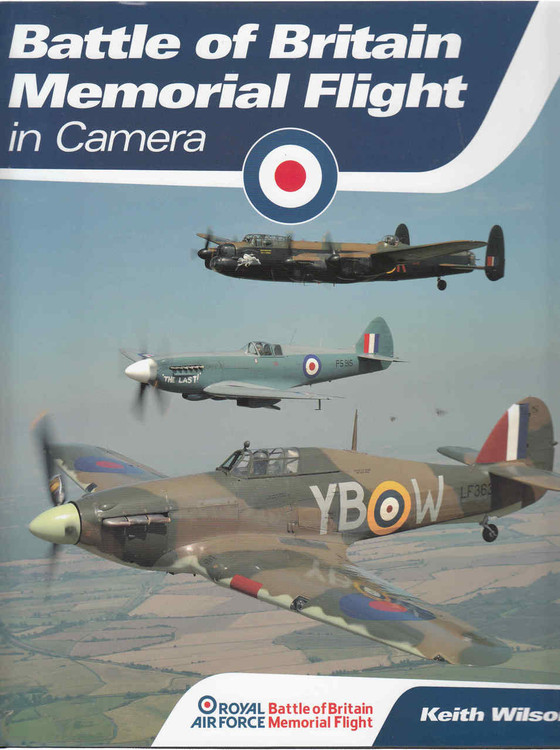 On 15 September 1945 a Spitfire flown by legendary RAF fighter ace Grp Capt Douglas Bader led a fly-past over London to mark the fifth anniversary of the Battle of Britain.

Millions of spectators lined The Mall to watch the formation as it passed over Buckingham Palace, a commemoration that became an annual event, led always by a Hurricane and a Spitfire.

The RAF Battle of Britain Memorial Flight was formed in 1957 by Wg Cdr Peter Thompson and serves as a permanent reminder of the 544 RAF aircrew killed during the Battle of Britain in the summer and autumn of 1940.

In the 21st century, six Spitfires, two Hurricanes, a Lancaster, a Dakota and two Chipmunks of the Flight perform at flying displays across Britain each summer.

Author and photographer Keith Wilson has enjoyed unique official access to the RAF Battle of Britain Memorial Flight, enabling him to showcase every aspect of the team at work — from pilots to ground crew, and the backroom staff who keep these rare and iconic aircraft flying.

His supporting narrative gives insights into the aircraft themselves, their histories and their programme of display events.

Battle of Britain Memorial Flight in Camera contains more than 300 stunning photographs, many of which were taken specially for this book, including dramatic air-to-air images of the Flight's aircraft.

With a foreword by the Air Officer Commanding 1 Group, Air Vice-Marshal Stuart Atha DSO, MA, BSc, RAF, Battle of Britain Memorial Flight in Camera is published with the full cooperation of the Royal Air Force and the RAF BBMF.

Keith Wilson has been involved in aviation publishing for more than 30 years and is probably best known for his striking air-to-air images in Pilot magazine.

He has more than 1,400 air-to-air sorties under his belt and has photographed a very broad range of subjects, from gliders, vintage and veteran, aerobatics and general aviation right through to high-altitude research aircraft, biz jets, commercial jets and military fast jets.

During this time he has amassed a photographic library of around 250,000 images.

He has worked for a number of well-known aviation companies across Europe and, not surprisingly, flying is also his hobby. He obtained his Private Pilot Licence back in 1981 and continues to fly at every opportunity.

Battle of Britain Memorial Flight in Camera is Keith's second book for Haynes. His first, Red Arrows in Camera, was published in 2012 to critical acclaim. He has already started work on further books for Haynes.

Keith also contributes photographs and articles to magazines and books around the world.

MSRP:
Now: $54.95
Was:
Designed as a carrier-borne strike aircraft for the Royal Navy, the Blackburn/BAe Buccaneer eventually went on to serve with the RAF and the South African Air Force. Operating from Royal Navy...

The Battle of Britain - Then and Now Mk V

MSRP:
Now: $169.95
Was:
This book epitomizes the entire "After The Battle" experience. Meticulously put together to commemorate the 40th Anniversary of the Battle Of Britain, this tome is arguably the best single source of...

MSRP:
Now: $55.00
Was:
By: Stephen Stathis . This Hardback Edition Is Limited To 600 copies This unique 176 page book, with a foreword by Colin Bond, features many colour and black and white images (44 pages of colour...