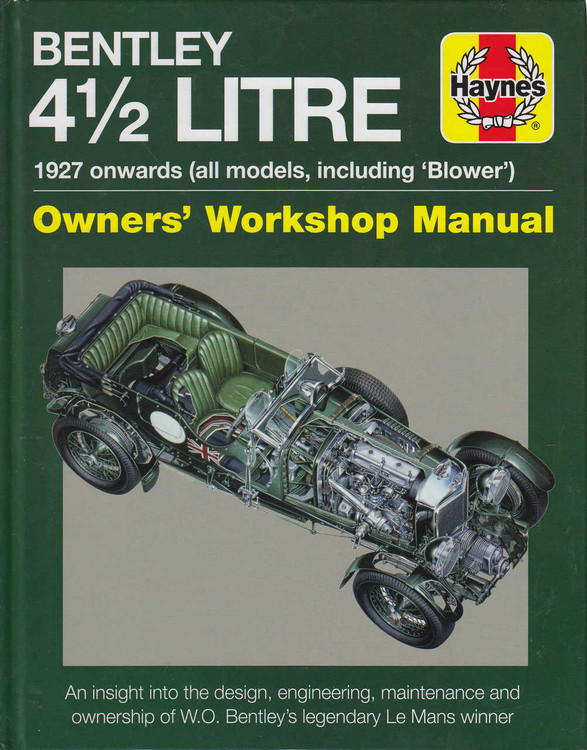 The 4 1/2-litre Bentley, and in particular the supercharged 'Blower' model, has become the most famous example of the marque. Tim' Birkin's chase of Rudi Caracciola's Mercedes-Benz at Le Mans in 1930 is one of the most stirring stories in motor racing history.
This manual examines all aspects of the Bentley 41/2-litre as a racing car, including its success and failures in the 1920s and 1930s. Top racecar engineer Andy Brown has contributed a detailed examination of the car's anatomy, illustrated with original factory drawings and numerous detailed photographs. Memories from the Bentley's leading period drivers and mechanics are included, plus interviews with many of those who are involved in preparing and racing these iconic cars today.
The leading factory-raced cars are all identified and their details recorded, and the business of buying and running such a car today is covered in detail, with the stories of a number of cherished examples.
This in-depth study is a must for all those interested in motor racing between the wars — a period during which the Bentley 41/2-litre arguably typified the British sporting spirit. The book also provides a fascinating insight into the history of endurance racing, and how cars of of the Bentley's era have been preserved and can still be enjoyed some 90 years later.

? The Bentley 4 1/2-litre story The racing history of the 41/2-litre Bentleys, including Le Mans and the story of Sir Henry 'Tim' Birkin's supercharged 'Blowers'
? Anatomy of the Bentley 4 1/2-litre Details of the car's components and evolution in both normally aspirated and supercharged form
? The driver's view How the contemporary drivers felt about the car, including the thoughts of Sir Henry Birkin, 'Sammy' Davis and Dr Dudley Benjafield
? The engineer's view Memories of the original 'Bentley Boys' plus stories of those involved in working on the cars today
? Restoration and historic racing Buying and owning a Bentley 4 1/2-litre, historic racing and restoration projects
? Individual chassis histories Outline histories of the
? individual Bentley 4 1/2-litre cars raced by the factory

Andy Brown is a leading race engineer, and has worked in Formula One (with March, Leyton House and Brabham), Indycar, the BTCC, historic racing and at  Le Mans. His success in America has included four Indianapolis 500 victories. Ian Wagstaff is a freelance journalist and twice winner of the Guild of Motoring Writers' Montagu of Beaulieu trophy, as well as its Pierre Dreyfus award and the American Auto Racing Writers and Broadcasters Association 'Book of the Year'.

MSRP:
Now: $39.95
Was:
1982 onwards (all models) An insight into the design, engineering, and operation of Porsche's World Championship, IMSA and Le Mans winning cars.  The Porsche 956 is the iconic...

MSRP:
Now: $39.95
Was:
By: Lain R. Murray . Description When the Second World War broke out, aeronautical engineer Barnes Wallis asked himself what he could do to shorten the war. His answer was to develop a range of...

MSRP:
Now: $39.95
Was:
By: Dr David Baker . Book Description NASA's Space Shuttle is unique in being the only winged manned spacecraft to achieve earth orbit and land back again, and the only reusable space vehicle...

MSRP:
Now: $175.00
Was:
By: Graham Robson ., 1st edition Bentley is one of those charismatic marques that, throughout its long and turbulent history, has produced some of the most famous cars of the time. Founded in 1919...

MSRP:
Now: $199.95
Was:
By: David Venables . Description Bentley is perhaps the most evocative name in British motor racing history and in this authoritative book, illustrated with a breathtaking collection of...