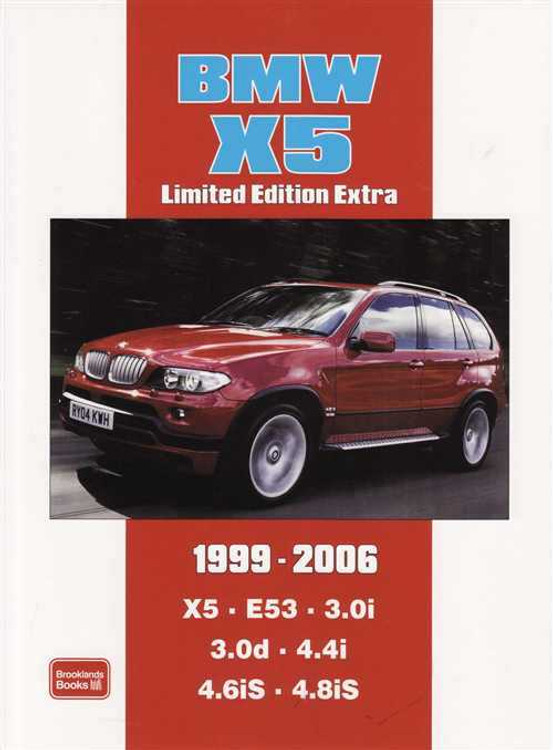 There seems to be no end to the world's insatiable desire for vehicles that purportedly have more than one use. This has seen an explosion in demand for so-called Sports Utility Vehicles (SUV) that evolved out of truck-like all-wheel drive vehicles that utilised quite outmoded chassis technology. BMW, however, was exploring various new market niches and hit upon the concept of a Sports Activity Vehicle (SAV) that became the X5. As has been well demonstrated, SAVs are quite different from SUVs.

The BMW X5 evolved out of studies carried out to create a new class of vehicle, that would combine BMW's renowned taut handling, executive-class fittings and style that would be equally at home at high speed on the motorway, commuting or off-road. It had to provide the driver with the full palette of BMW characteristics. All-wheel drive was a given although the marketing people at BMW did not envisage that being critical to their buyer profile. How right they were!

To achieve their objectives they mixed and matched components, engines, driveline and suspension parts and the many electronic controls like ABS, Dynamic Stability Control (DSC) and Hill Descent Control (HDC), from existing 5 and 7 Series and combined these with a large-but-roomy monocoque body and versatile interior that would cosset the occupants and be stylish into the bargain.

When released late in 1999 the BMW X5 set a completely new benchmark, one far higher than anybody had foreseen and which few have matched today, many years later. It is true that its off-road performance was average but its on-road performance was staggering, especially if it was the X5 4.4i with the superb 286bhp DOHC V8 engine. For those who valued economy there was the 231bhp DOHC 3.0i six-cylinder engine.

With continued development and refinement the X5 has received a magnificent 3.0 turbo diesel engine that develops 184bhp and an enormous 390Nm of torque at just 1750rpm. Since its release it has become the most popular engine choice. The V8 engine has seen progressive expansions of capacity, first to 4.6-litres in 2001 and finally to 4.8-litres early in 2004. There was also a one-off X5 Le Mans powered by the 6.0-litre V12 of 700bhp out of their winning racing car that lapped the famous Nürburgring Nordschleife circuit quicker than most supercars!

From the beginning accolades poured in from the world's media because it was a concept that hit all the right buttons, it was stylish in a way that disguised the X5's bulk, its interior catered for those who demanded luxury, it had stonking performance and was reasonably capable off the road. Buyers flocked to BMW showrooms everywhere to buy the X5 in numbers that I am sure BMW never envisaged.

MSRP:
Now: $29.95
Was:
Having this book in your pocket is just like having a real marque expert at your side. Benefit from Tim Saunders’ years of ownership experience, learn how to spot a bad X5 quickly and how to...

MSRP:
Now: $150.00
Was:
By: Mick Walker . In just a few years the BMW Z3 has earned itself the title of one of the world's most desirable cars. Its styling and performance, and the cachet of the all-important badge, have...

MSRP:
Now: $49.95
Was:
By: Brooklands Books . The Z3 broke new ground at BMW. Surprising as it may seem for a company whose reputation depends so heavily on sporting performance, there had never before been an affordable...

BMW The Power of M

MSRP:
Now: $109.99
Was:
Beginning with BMW’s earliest involvement in motorsport, this book charts the evolution of the M division, from its genesis in 1972 with just 8 employees, to its current status as a vital...

MSRP:
Now: $199.95
Was:
By: Phil Henny . Born in Evanston, Illinois in 1933. Bob grew up in West Los Angeles, where his family moved in the late thirties. He raced motorcyles on local dirt tracks and started road racing in...