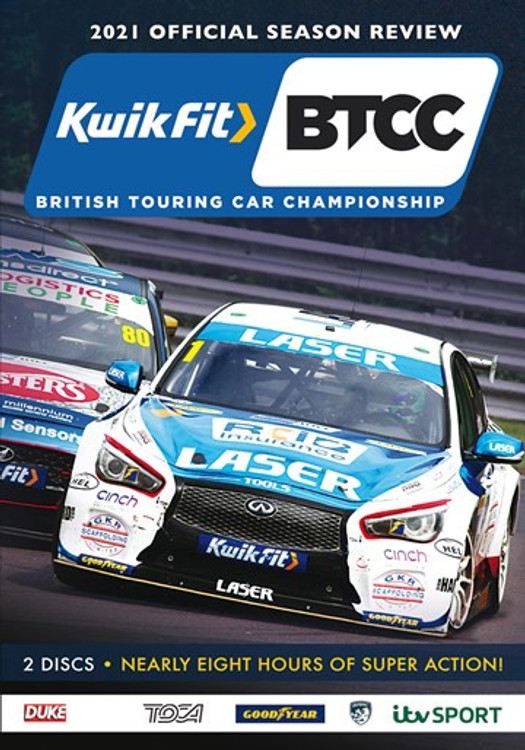 Third time's the charm for Ash Sutton as he made it back-to-back titles for his Laser Tools Racing team and his third overall in a thrilling season-long campaign. The 27-year-old Infiniti driver looked like a champion throughout the 2021 British Touring Car Championship, fending off strong attacks from the likes of Colin Turkington and Josh Cook.

As always with BTCC, every single race of the season is packed with drama, as nine different manufacturers compete for race wins and vital points in the championship title fight. Across the very best race circuits the UK has to offer, BTCC delivers race after race of thrilling action. The official season review is here to bring you all of the best moments from the season in nearly eight hours of high quality action.

MSRP:
Now: $59.95
Was:
PAL, Region Code 0 All Regions, 2 discs, 473 minutes There's so much to love about the Dunlop MSA British Touring Car Championship Official Review. There's really nothing quite like it...

MSRP:
Now: $49.95
Was:
Every single year the BTCC Official Review delivers bang after bang after bang. This is our pick as the ‘most bang for yer buck’ motorsport review of the year. With over seven and a half hours of...

MSRP:
Now: $49.95
Was:
Pal, Region Code 0 all regions After a season of top class thrills and spills that saw the British Touring Car Championship circus travel the length and breadth of Britain for thirty thrilling races,...

MSRP:
Now: $49.95
Was:
Pal, Region Code 0 all regions, 458 minutes You just can’t stop BTCC, it always delivers the goods What more could you ask for? Even in the face of the worst global pandemic for more than a...

This motoring - Being the romantic story of the Automobile Association (Stenson Cooke, 1931)

MSRP:
Now: $45.00
Was:
This motoring - Being the romantic story of the Automobile Association (Stenson Cooke, 1931) - 2nd hand book in good condition.

MSRP:
Now: $150.00
Was:
Perhaps only the most enthusiastic, among the many Moto Guzzi enthusiasts, are aware of the technical affinity between the 'single cylinder' engine of the racing '250' from the Mandello company and...

MSRP:
Now: $49.95
Was:
THE Official Review of the 2021 FIA Formula One World ChampionshipTM on two-disc DVD   Unpredictable, explosive and intense to the end – experience a season like no other   Get...

MSRP:
Now: $35.00
Was:
A comprehensive trouble-shooter that no TR2 or TR3 owner should be without. This handy book describes all the main components of these cars and details what can go wrong with each of them, how to fix...