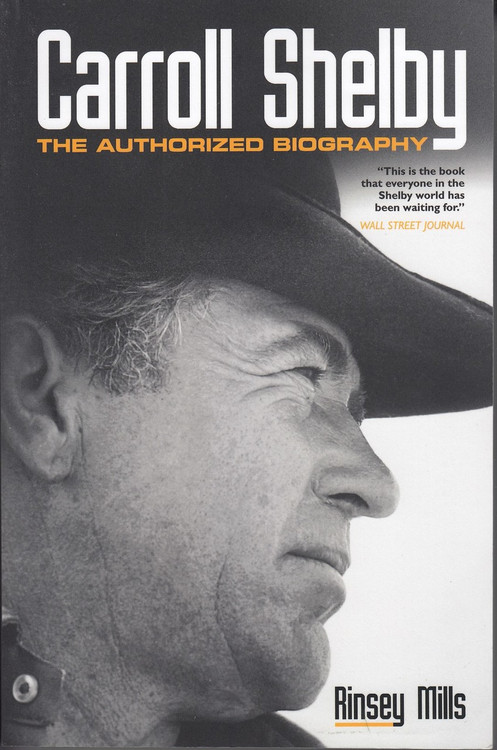 Carroll Shelby: The Authorized Biography has been a long time in the making and no stone has been left unturned in the quest to produce the complete study of a remarkable life. With Carroll's enthusiastic collaboration, author Rinsey Mills has carried out extensive research and conducted numerous interviews not just with Carroll himself but also with family and friends as well as those who have worked with him.

Carroll's early years are explored in detail: growing up in Texas, joining the Army Air Force during wartime, and early entrepreneurship postwar in the form of trucking and poultry-rearing businesses. But then he discovered car racing and achieved his first race wins in 1952.

For the rest of that decade Carroll had a glittering international career as a racing driver. Many of his race wins were in Ferraris and Maseratis. but his biggest success came in 1959 with a works Aston Martin when he and Roy Salvadori won the Le Mans 24 Hours. He was a truly versatile competitor, from record-breaking at Bonneville to Mexican road racing on the Carrera Panamericana.

A significant moment came in 1957 when he opened Carroll Shelby Sports Cars in Dallas. Gradually there emerged a dream—to build his own sports car—and it became a reality when the legendary Cobra was born in 1962. with Shelby American being created to manufacture and race the cars.

With Fords backing. Shelby American went on to achieve a formidable array of track successes, first with Cobras in roadster and Daytona Coupe forms, then with Ford GT40s, which won twice at Le Mans under Carroll% expert management. Ford also asked him to wave his magic wand on the Mustang and the GT350 was created, starting another Shelby bloodline that continues to this day.

Carroll's life away from cars has been just as packed, and alt aspects are covered: his numerous interests (from farming to flying). his health issues (including a heart transplant), his globetrotting (including his "lost" years in Africa), and much more.

This magnificent book is a lasting tribute to one of the great automotive figures of the 20th century.

MSRP: $275.00
Now: $195.00
Was:
Author: Rinsey Mills, 1st Edition -* This book was first released the week after the great man's passing ! Carroll Shelby: The Authorized Biography has been a long time in the making and no stone has...

MSRP: $275.00
Now: $195.00
Was:
Author: Rinsey Mills, 1st Edition -* This book was first released the week after the great man's passing ! Carroll Shelby: The Authorized Biography has been a long time in the making and no stone has...

MSRP:
Now: $20.00
Was:
Cavallino The Journal Of Ferrari History Number 228 Jan 2018 / Dec 2019 The most enduring and collectable journal on Ferrari in the market for well over three decades !

MSRP:
Now: $139.95
Was:
Author: Anthony Peacock, Reinhard Klein, Colin McMaster, Hardcover, Published in 2018, The World Rally Championship (WRC) just gets better and better. 2018 will long be remembered as a gripping...