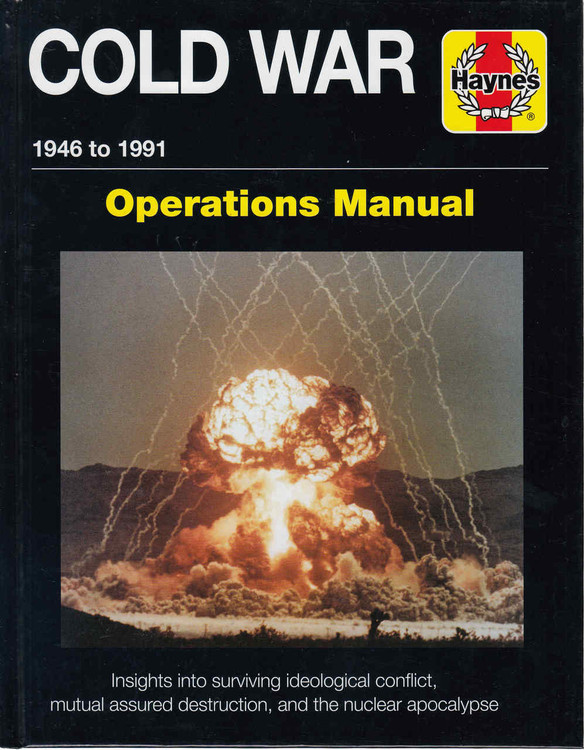 For more than 50 years after the Second World War the nations of the earth stood on the edge of the nuclear precipice, with few doubting that should the Cold War turn hot, neither side could emerge victorious.

The awful consequences of a nuclear confrontation were hinted at by Albert Einstein: 'if the next world war is fought with nuclear weapons, the war after that will be fought with bows and arrows,' he warned.

Pat Ware describes the background to the Cold War, the East-West arms race, the insanity of 'mutual assured destruction' (MAD), preparations taken by Western governments against the real possibility of nuclear war, and the complete lack of any credible civil defence measures.

He also examines the massive infrastructure and organisation required to maintain a credible Cold War stance.

Supported by more than 270 archive photographs and illustrations, the Haynes Cold ,War Operations Manual describes the West's offensive and defensive infrastructures and demonstrates just how close the world has come to a nuclear Armageddon on several occasions.

Pat Ware was the founding editor of Classic Military Vehicle magazine, and is a recognised authority on military vehicles, as well as being the author of several Haynes manuals.

His long-time interest in the British military vehicles of the 1950s led, inevitably, to a wider interest in the Cold War period, and his growing collection of Cold War documentation, both official and unofficial, gave rise to a horrified fascination with the contradictions of nuclear war.

He lives in Norfolk.

MSRP:
Now: CAD47.30
Was:
Operations Manual April to June 1982 When Britain sent a Naval Task Force to the South Atlantic in 1982 to reclaim the Falkland Islands from Argentinian invaders, it was a triumph of logistical...

MSRP:
Now: CAD47.30
Was:
The Blitz was one of the gravest threats the UK has faced in its long history. From August 1940 to May 1941, the island nation was subjected to a relentless campaign of aerial bombing. German night...

MSRP:
Now: CAD52.04
Was:
The discovery and widespread use of penicillin in the Second World War was a major turning point in 20th century combat medicine. It led to further enormous changes in the way wounded soldiers were...

MSRP:
Now: CAD47.30
Was:
The history of the Roman Empire and its technological and military prowess, resounds through the ages. At its height the empire covered five million square kilometres and held sway over 70 million...

MSRP:
Now: CAD236.75
Was:
By: Karl Ludvigsen . Introduction Colin Chapman was one of the greatest ever creative forces in the automotive world but he left behind a mixed legacy. Was he an unparalleled innovator who advanced...

Codename Valkyrie - General Friedrich Olbricht and the plot against Hitler

MSRP:
Now: CAD284.05
Was:
By: Trevor Legate . 2nd hand book in very good condition Description This book tells the complex saga of a sports car that was created in the early 1960s as a result of an unlikely...

MSRP:
Now: CAD260.43
Was:
By: Colin Seeley . Following the success of 'Colin Seeley ...Racer and the rest' this second volume covers the period from 1970 to the present day. Colin's career is a roller-coaster ride from...

MSRP:
Now: CAD184.67
Was:
By: Colin Seeley . Britain in the 1950s was a time of great design innovation for the motorcycle. Way back in 1954, when Colin Seeley was riding around on his father's Vincent outfit, little did he...

MSRP:
Now: CAD66.24
Was:
By: Ken Stepnell . Description This rare collection shows the variety of cars in Australia across all makes — from Dodge to Rolls-Royce, Rover to Chevrolet, Toyota to Ford and of course...