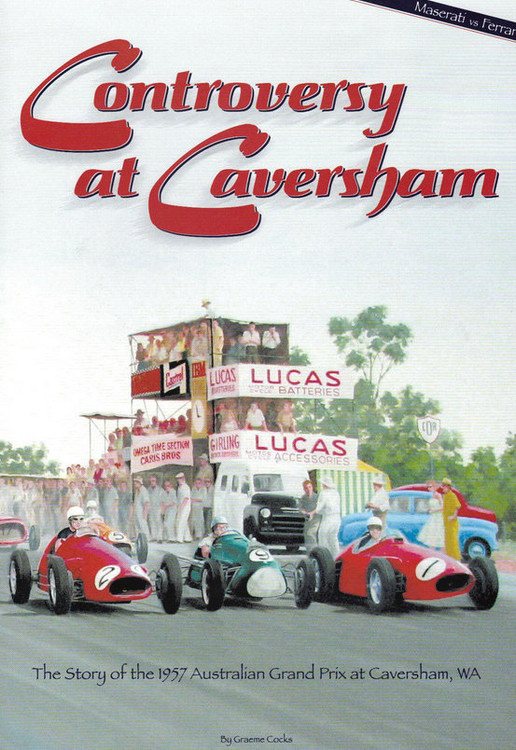 The story of the 1957 Australian Grand Prix at Caversham, Western Australia.

The 1957 Australian Grand Prix at the Caversham circuit in Western Australia was one of the most controversial Grand Prix races ever held in Australia.

It was a contest between two of the titans of Australian motor sport in the 1950s – Stan Jones and Lex Davison. The three-litre Maserati versus the three-litre ex-F1 Ferrari of Lex and a 70 lap final in soaring 104-degree heat. These brave legends wrestling their cars around the circuit is testing conditions makes for a fascinating story.

This is the story of the drivers, the race and the repurcussions. The result is still being debated today.

A 44 page booklet that brings all the stories behind the race together.

MSRP:
Now: $110.00
Was:
This stunning book from award winning publisher Coterie Press, Ian Walker, The Man and His Cars, explores the life and times of Ian Walker. “Walker The Talker” as he was frequently...

MSRP:
Now: $75.00
Was:
The fifth volume in Brian Long s series, chronicling in definitive depth the history of the evergreen Porsche 911, from the earliest design studies to the water-cooled cars of today. This newly...

MSRP:
Now: $19.95
Was:
A bus or coach is usually referred to as a Bedford, a Dennis, an AEC or whatever, but in most cases only a badge, or perhaps a radiator grille, identifies it externally in that way; that is the...

MSRP:
Now: $80.00
Was:
Mike Spence was one of the most liked and respected drivers of grand prix racing in the 1960s. A loyal friend and team-mate of Jim Clark, Mike also raced for BRM and Emeryson in Formula One and in...

MSRP:
Now: $45.00
Was:
From its launch on 20 September 1961 the Mini Cooper caused a sensation. The world’s first sports saloon, the diminutive Cooper combined the glamour and racing heritage of 1959 and 1960 Formula...