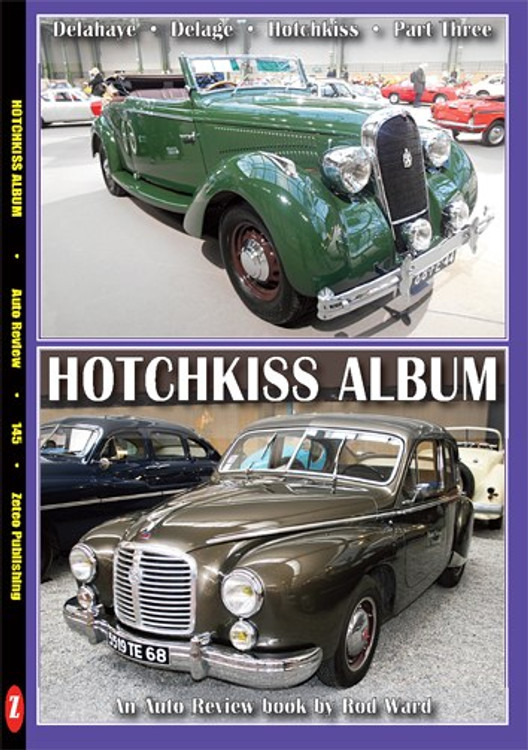 Author: Rod Ward, Published in 2018, paperback, 31 pages
In the opinion of William Boddy, revered editor of Motor Sport, ‘the Hotchkiss company was one of those manufacturers who never made a bad car, or at least very few of them. Others who come into this enviable category are Lancia, Mercedes, Rolls-Royce’.
That is quite an accolade for a car manufacturer largely forgotten by most car enthusiasts in the 21st century. Hotchkiss started out in the 19th century as an arms manufacturer, making the fortune of its founder, Benjamin Berkeley Hotchkiss, through sales to the Union side in the US Civil War. He moved to France in time to sell munitions for use in the Franco-Prussian war, then he began to design revolving cannon and machine guns.  He was succeeded in charge at Hotchkiss in Paris by another American, Laurence Vincent Benét, with an Englishman, Charles Parsons, as company chairman. The company diversified into car production and Benét was succeeded by Henry Ainsworth, who brought another Englishman to Hotchkiss in the 1920s. Alfred Wilde was an accomplished car designer, responsible for the 1909 Standard Nine. Juste Milieu was the advertising slogan used by Hotchkiss. Loosely translated it means ‘A happy medium’. This understatement appears to be more British than French, and indeed, the whole company ethos was very British.
Hotchkiss produced fine cars, some sporting, others more luxurious, whilst still producing guns and tanks. In 1936 the armaments side of the business was nationalised, so Ainsworth expanded car production with a new advanced design by J A Grégoire. Hotchkiss took over another car firm, Amilcar, so the new car, built in the Hotchkiss factory, was badged as the Amilcar Compound. The postwar years were difficult for Hotchkiss, forced to make only large cars which were subject to punitive taxation in France. A merger with Delahaye, licence-building of Jeeps and Ferguson tractors, and expansion into the commercial vehicle market did not really solve the long-term problems at Hotchkiss. In 1954, therefore, Hotchkiss-Delahaye was taken over by Brandt, and car production ceased. Trucks, tractors and armoured vehicles remained in production until 1 January 1971, when Automobiles Hotchkiss closed down.
View AllClose

MSRP:
Now: CAD18.83
Was:
By Rod WardISBN 978-1-85482-149-5In its heyday a Packard was an esteemed luxury car built by hand to the highest standards, and it became one of the top three American car marques, in its early years...

MSRP:
Now: CAD18.83
Was:
paperback, 31 pages,  Adam Opel was born in 1837, and originally trained as a locksmith, then he turned to making sewing machines, adding bicycles to his product range in the late 19th century...

MSRP:
Now: CAD28.26
Was:
By Chris Rooke  Features • What to look for when buying a Triumph Trident or BSA Rocket III • Differences between models explained • Written by an experienced Triple...

MSRP:
Now: CAD28.26
Was:
Features • Like having a real marque expert at your side – benefit from the author’s expertise and experience • Advice on choosing the right model and condition • Key...

MSRP:
Now: CAD122.63
Was:
By: Derrek Bell, Alan Henry . Description Derek Bell has enjoyed one of the most successful, diverse and wide-ranging careers of any British racing driver. Having honed his burgeoning talent in the...

Original Citroen DS (reissue): The Restorer's Guide to all DS and ID models 1955-75

MSRP:
Now: CAD28.26
Was:
Features • Benefit from the author’s many years of Triumph experience • Advice on choosing the right model • Key checks - How to spot a good car quickly • Comprehensive...