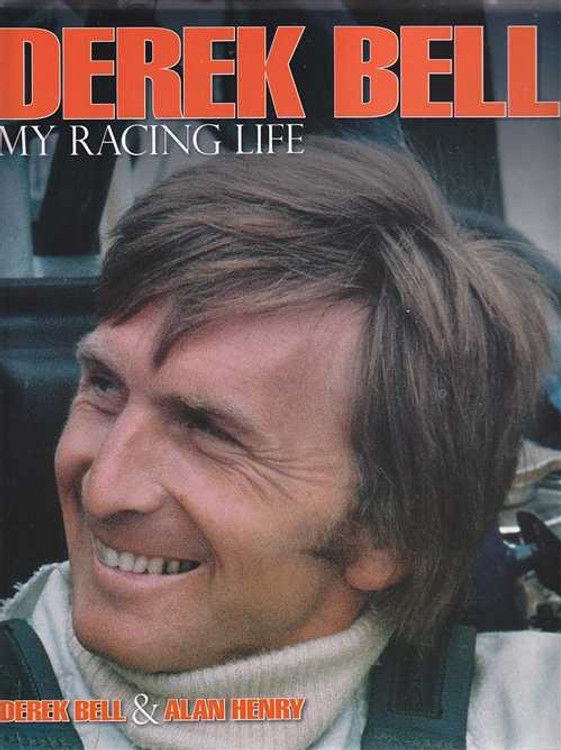 Derek Bell has enjoyed one of the most successful, diverse and wide-ranging careers of any British racing driver. Having honed his burgeoning talent in the hotly contested cut-and-thrust of international Formula 3 and Formula 2 during the 1960s, in 1968 Bell found himself catapulted into the Ferrari Formula 1 team at the age of 26 and made his Grand Prix debut in front of the massed ranks of car-crazy tzfosi at Monza. Sadly, he arrived at Maranello during one of its periodic downturns and his tenure with the most famous name in motor racing lasted less than a year.

But Bell bounced back to establish a world-renowned reputation as an endurance sports. car driver throughout the 1970s and '80s with Porsche, scoring five wins in the legendary Le Mans 24-hour classic and three wins in the similarly gruelling Daytona 24-hour race, as well as winning the 1985 World Endurance Championship and the 1986 World Sports Car Championship along the way. During the course of his career the roll-call of his driving partners reads like a who's who of international motor racing as Bell shared long-distance race wins with the likes ofJacky Ickx, Jo Siffert, Mike Hailwood, Stefan Bellof, Hans Stuck, Jochen Mass and Al Holbert in races across the world.

Bell's story charts his path from club racing at Goodwood, close to his family home on the Sussex coast, through to the centre of the international motor racing scene and the kaleidoscope of mixed emotions triggered by the deaths of close friends and colleagues — such as Jim Clark—which made racing such a raw and uncompromising affair early in his career. He also recounts in graphic detail the disappointment generated by his efforts to revive his Formula 1 career with the Tecno and Surtees teams in the early 1970s in addition to the huge satisfaction he derived from sharing the third-placed McLaren at Le Mans in 1995 with his son Justin.

Since the late 1980s Derek has based himself in the USA, where he lives with his second wife Misti and their son Sebastian. Since retiring from driving he has carved out a new career as a Bentley dealer in Florida as well as a promotional ambassador for the iconic British brand.

In writing this comprehensively updated edition of Derek Bell: My Racing Life, he has collaborated with internationally respected motorsport journalist Alan Henry who he has known for more than 40 years.

Derek Bell - All My Porsche Races

MSRP:
Now: $139.95
Was:
By Derek Bell and Richard Heseltine Over the course of his long and hugely successful career, Derek Bell’s name became inextricably linked to Porsche. Among countless other victories, the...

MSRP:
Now: $59.95
Was:
By: Mick Walker . Derek Minter started his career in 1953 on a BSA Gold Star: His early promise inexperienced youngster was very, quickly fulfilled. After transferring to a couple of Nortons he soon...

MSRP:
Now: $39.95
Was:
By: Stephen Slater . This owners workshop manual  is an insight into owning, flying and maintaining the legendary British training biplane. Havilland Tiger Moth Introduction The de...

Derek Bell - All My Porsche Races

MSRP:
Now: $139.95
Was:
By Derek Bell and Richard Heseltine Over the course of his long and hugely successful career, Derek Bell’s name became inextricably linked to Porsche. Among countless other victories, the...

MSRP:
Now: $29.95
Was:
Features • Like having a real marque expert at your side – benefit from the author’s hands-on experience • Key checks - how to spot a bad car quickly • Comprehensive...

MSRP:
Now: $79.95
Was:
By: Brooklands Books . The Delahaye Portfolio Description The Delahaye Type 135 earned its iconic status due to fabulous body designs created by famous coachbuilders. But it was much more than the...