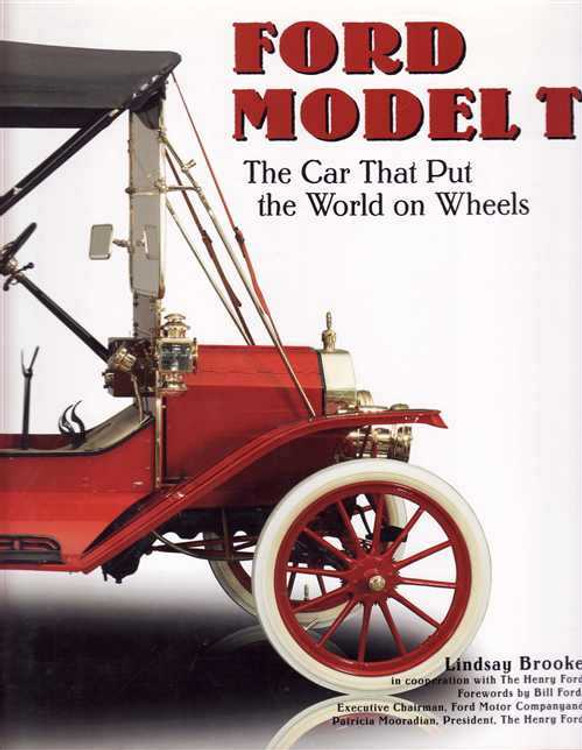 When Ford Motor Company introduced the Model T in late 1908, company officials knew they had a winner. Ford was already the national sales leader, and the new car was a significant improvement over its predecessors. Yet even an inveterate optimist like Henry Ford could not predict the far-reaching changes his "Tin Lizzie" would effect.

One hundred years later, this marvelously illustrated history of the automobile that launched an American industry takes on all aspects of the Model T's genesis, production, marketing, and legacy. Veteran automotive journalist and editor Lindsay Brooke examines everything from infrastructure considerations that influenced the car's design (its ground clearance, for example, was predicated on the abysmal state of U.S. roadways) to the production methods that evolved to meet the burgeoning demand for the car, and Ford Motor Company's introduction of the revolutionary "five-dollar day." Brooke also covers the Model T's predecessors, early sales and marketing efforts, model changes, and T trucks, as well as adventures and misadventures with Model Ts and the car's role in early motorsports and hot rodding.

Illustrated throughout with photography and period art, much of it from the Benson Ford Research Center at The Henry Ford in Dearborn, Michigan, Ford Model T The Car That Put the World on Wheels is a fitting tribute to the first automotive icon.

MSRP:
Now: $175.00
Was:
By: Sam Roberts . The fascinating account of the conception, development, production and assembly of the first Ford designed specifically for a market outside the United States. In-depth research...

MSRP:
Now: $27.50
Was:
By: Factory . 2nd hand book, very good condition Foreword This supplementary repair manual has been prepared to highlight new features of the Meteor Wagon and running changes which have been...

MSRP:
Now: $175.00
Was:
By: Sam Roberts . The fascinating account of the conception, development, production and assembly of the first Ford designed specifically for a market outside the United States. In-depth research...

MSRP:
Now: $120.00
Was:
By: Brooklands Books . 2nd hand book - like New Condition. This is a collection of road tests, specification and technical data, performance data, driver's reports and consumer analysis. All...

MSRP:
Now: $89.99
Was:
This is the definitive history of Ford’s 8hp Model Y and the 10hp Model C, and their variants – cars that saved Ford from bankruptcy in Europe following the Great Depression of the...