Formula One 2016 Official Review - They Did Their Best Bluray 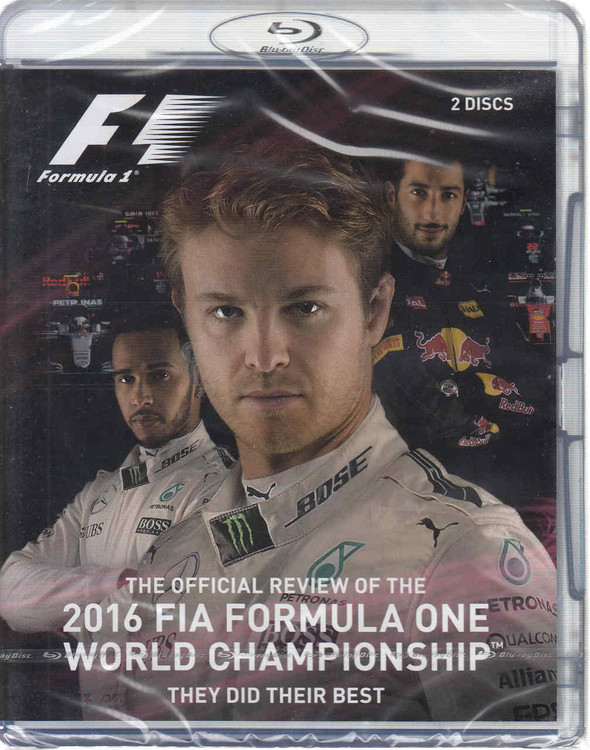 Formula One 2016 Official Review - They Did Their Best Bluray

It was  a fight that swung back aqnd forth between the two main protagonists.

Nico kicked off the season with four consecutive wins while Lewis was rather slow to mount a challenge but he eventually dis just that - team orders or no !

With clashes both on and off track, their ruthleess pursuit of the title left their relationship in tatters.

The drama went down to the final round in Abu Dhabi. Lewis had nothing to lose while Nico had to keep his cool.

Formula One again broke into new territory with the first race in Azerbaijan around the streets of the dazzling capital Baku.

2009 World Champion Jenson Button and eleven time race winner Felipe Massa waved emotional goodbyes to the sport, whilst Max Verstappen took it to the next level and became the youngest ever Fl race winner aged just 18.

His ability to perform the most audacious overtakes where no one else would dare, earned him a reputation as a potential World Champion.

Watch Rosberg fight until the very last lap for his first World Championship triumph and feel Hamilton's heartbreak as he is forced to surrender his Formula One crown to his childhood rival.

For over 65 years, Formula One has captivated audiences across the world and the OFFICIAL REVIEW OF THE 2016 FORMULA ONE WORLD CHAMPIONSHIP brings you all the action, intrigue and controversy.

Featuring previously unseen footage and exclusive team radio audio The 2016 FIA Formula One World ChampionshipTM has been dominated by the battle between Mercedes team mates Nico Rosberg and Lewis Hamilton.

As we’ve written in these pages before, some of the very best F1 seasons are those where two drivers on the same team, in identical cars, are so far ahead of the pack the battle boils down to a tense, nervy grudge match of mind games and mind blowing driving as they push each other to the limits.

Not that we’d describe the Hamilton – Rosberg situation as a grudge match, of course…

What you get with the Official Review of the season is a masterful recapping of an eventful and, at times, controversial year of F1 from the pre-season testing right through to the last race at Abu Dhabi.

Packed with race footage from every round, interviews, statistics, analysis and insightful commentary, the F1 review is quite simply the World’s best motorsport programme, year in year out.

MSRP:
Now: $49.95
Was:
Region 2, PAL, 5hrs 52 minutes. THE OFFICIAL REVIEW OF THE 2020 FIA FORMULA ONE WORLD CHAMPIONSHIPTM Records broken. Legends made. History rewritten. 2020 was the season that could not be stopped...

MSRP:
Now: $59.95
Was:
The official review of the 2017 FIA Formula One World Championship, 286 minutes. Fangio, Prost, Schumacher and Vettel. In 2017 a fifth name joined the elite list of drivers crowned champion for...

MSRP:
Now: $59.95
Was:
The official review of the 2017 FIA Formula One World Championship, 286 minutes. Fangio, Prost, Schumacher and Vettel. In 2017 a fifth name joined the elite list of drivers crowned champion for...

MSRP:
Now: $59.95
Was:
Victorious Vettel (2 Blu-ray SET) The 2012 season had a script worthy of a Hollywood blockbuster! A record-breaking six World Champions took to the track in the battle for supremacy. With seven...

MSRP:
Now: $49.95
Was:
The official review of the 2017 FIA Formula One World Championship DVD, 286 minutes, 2 discs Fangio, Prost, Schumacher and Vettel. In 2017 a fifth name joined the elite list of drivers crowned...