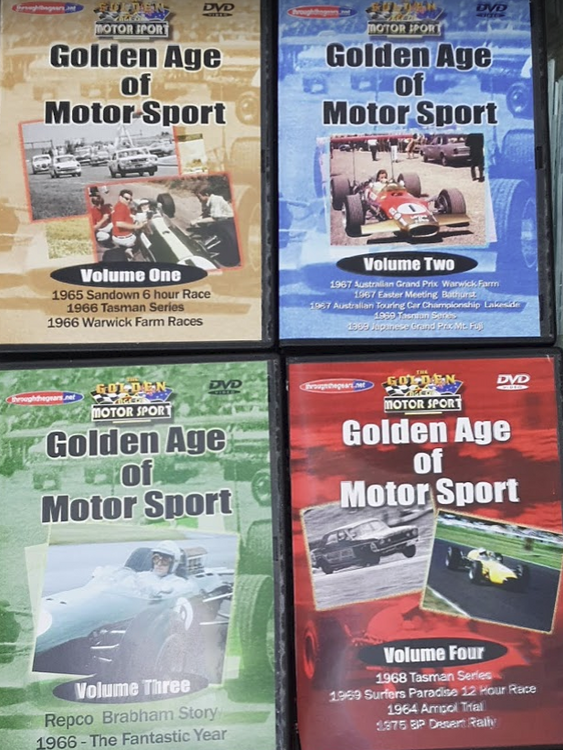 These original films capture the colour, sounds, famous drivers, cars and Australian circuits in the 1960's.

The 1966 Tasman Series features Jim Clark in the Lotus taking on Graham Hill and newly emerging Jackie Stewart in the BRM, and a host of locals, racing at Lakeside, Sandown and Warwick Farm and Longford.
The Sandown 6 hour race with Cortinas, Jaguars, Mustangs, Minis and Alfas with Allan Moffat, Bob Jane, Peter Manton and we reminisce with legendary drivers Frank Gardner and Kevin Bartlet

These original films capture the colour, sounds, famous drivers, cars and Australian circuits in the 1960's.

The Easter Bathurst meeting at the famed Mt Panorama circuit where Kevin Bartlett records the first ever 100 mph lap.

The 1969 Japanese Grand Prix was held on the banked Mt Fuji circuit.

An Australian contingent went to Asia, taking on the Japanese teams.

These original films show the rise of Jack Brabham and Repco, through the Tasman Series in 1965, unique factory scenes in England and world championship success in 1966.
They're a colourful and professional record of a unique achievement.

The 1964 Ampol Trial revived the great events of the 1950's. There were some unlikely entrants including the Lightburn Zeta.
And the 1975 BP Desert Rally, as off road motor sport grew in popularity.

MSRP:
Now: $49.95
Was:
By: A. B. Demaus . It is a fortunate fact of history that the art of the photographer, both professional and amateur, had reached some level of proficiency by the time the motor car had become a...

MSRP:
Now: $69.95
Was:
Here’s your chance to relive some of the magic moments of Australian touring car racing with volume 4 of the Seven Sports Magic Moments Of Motorsport DVD series. This series features action...

Vic Elford - Reflections on a Golden Era In Motorsports

MSRP:
Now: $295.00
Was:
By: Vic Elford . Vic Elford began his career in rally cars and was a factory driver for BMC and Ford. In 1966, he initiated his long-lasting relationship with Porsche by persuading Porsche's racing...

The Golden Age Of Formula 1

MSRP:
Now: $450.00
Was:
By: Rainer W. Schlegelmilch . The Golden Age Of Formula One - Book Description Few spectator sports generate such excitement as Formula 1. The name refers to the most advanced and competitive of the...

MSRP:
Now: $79.95
Was:
By: Ron Ayres . Jam-packed with advice from long-distance motorcycle travel veterans, and written by best-selling author Ron Ayres, this handbook can help you extend your range on a motorcycle...

MSRP:
Now: $69.95
Was:
By: Skip Barber . This complete racer's reference is the perfect resource for drivers from novice to expert. The fundamentals of fast driving are revealed in this definitive how-to book for...

MSRP:
Now: $39.95
Was:
Thirty years on the muscle car era still resonates. Why do these beautiful beasts hold to much fascination? Read Golden miles to get the truth about a time when modern Australia's real sense of...