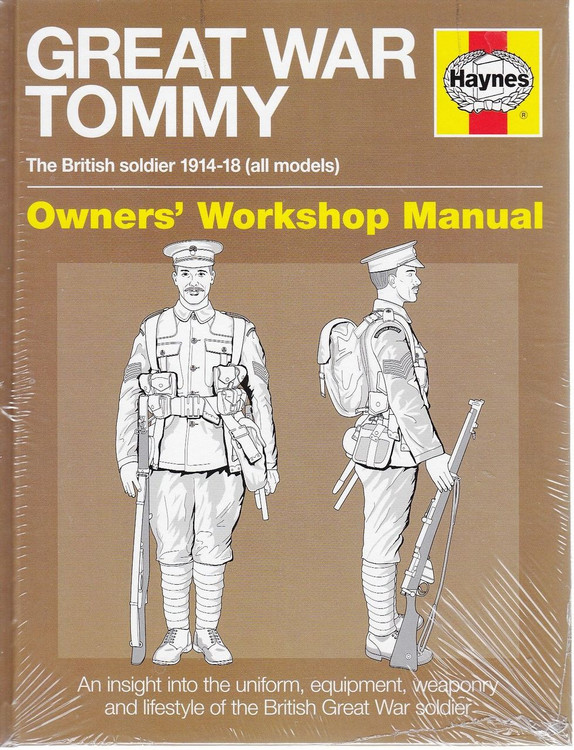 An insight into the uniform, equipment, weaponry and lifestyle of the British Great War soldier.

Interest in the life and times of the Great War British soldier - or Tommy - has never been greater. Most people's impressions of the war have been formed by the many photographs of soldiers at rest and in action in their trenches, with hellish images of mud and barbed wire. But there is another dimension - that of equipping and training the soldier - which is not depicted in these graphic images of war.

There is an abiding fascination with the uniform and equipment of the Great War Tommy: what was the ill-fitting khaki-serge uniform like to wear? What were puttees for? What did a gas mask look like and how did you put it on? How heavy was the equipment?

The Haynes Great War Tommy Manual focuses on the infantryman serving on the Western Front and answers some of these questions, as well as examining many other aspects of his uniform and equipment, drill and training, weapons and defences.

Most of the colour images reproduced in this manual were specially commissioned and show historical interpreters wearing the uniforms, carrying the equipment and digging trenches, giving them personal insights into the practicalities of the life of a Great War Tommy.

About the Author
Peter Doyle is a military historian and author who has written widely on the First World War. He is a visiting Professor at University College London and is co-secretary ot the Ali-Party Parliamentary' War Heritage Group. He lives
in Essex.

MSRP:
Now: $49.95
Was:
By: Dr David Baker . Book Description NASA's Space Shuttle is unique in being the only winged manned spacecraft to achieve earth orbit and land back again, and the only reusable space vehicle ever to...

MSRP:
Now: $49.95
Was:
Author: David Fletcher MBE, ISBN: 9780857332424, Hardcover An insight into the history, development, production and role of the main British Army tank of the First World War. The invention of the...

MSRP:
Now: $54.95
Was:
1982 onwards (all models) An insight into the design, engineering, and operation of Porsche's World Championship, IMSA and Le Mans winning cars.  The Porsche 956 is the iconic ‘Group C’...

MSRP:
Now: $54.95
Was:
The McLaren MP4/4 is the iconic Honda V6 turbo-powered F1 car built by McLaren for the 1988 grand prix season, driven by Ayrton Senna and Alain Prost. Remarkably, the car won all but one race during...

MSRP:
Now: $49.95
Was:
Author: David Fletcher MBE, ISBN: 9780857332424, Hardcover An insight into the history, development, production and role of the main British Army tank of the First World War. The invention of the...

MSRP:
Now: $89.99
Was:
By: Phil Ward . In deciding which models to choose for inclusion in this book selected from Fiat's huge inventory, the author concentrated on three criteria – greatness, size and emotion. Where...

MSRP:
Now: $45.95
Was:
By: Haynes . Home Mechanic provides a wealth of information on the workings of the modern automobile, together with trouble shooting, service, repair and testing procedures for the majority of the...