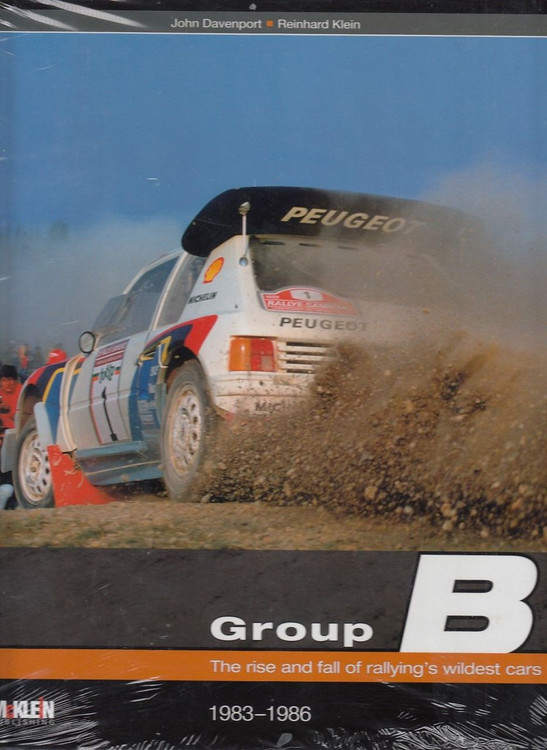 A proven content presented in a new guise: The new edition of this standard work comes in the smaller format of 24.5 x 30cms and with just one language per book. This gave the authors Reinhard Klein and John Davenport the chance to include even more fascinating images from rallying's wildest period when limits were seemingly non-existent. To this day, many fans still consider Group B to be the epitome of madness on wheels. Never since that era have engineers had such enormous freedom to create extreme rally cars as they did during that fantastic period of the early 1980s.

This book tells the story of all the cars developed within Group B, from the Quattros to the outstanding Lancias and Peugeots and to the exotic sports cars from Porsche and Mazda. But all the technical development came to a head in the year 1986, when the euphoria somehow turned into an ungovernable risk. The mischief of engineers, rally organisers, motor sport politicians and fans led to tragic accidents that finally resulted in Group B cars being banned from international rallies.

John Davenport, rally-journalist and author of several books on rallying, experienced this era first-hand, as he was Motorsport Director of Austin Rover at the time. His comprehensive knowledge takes the reader on a journey into the fascinating world of these hi-tech rally cars and offers an authoritative insight into the power struggles going on behind the scenes.

The book is filled with photographs from the archive of well known rally-photographer Reinhard Klein. They show to best effect the technical details of the cars, the slightly crazy ambiance of the time as well as plenty of action from the special stages.

MSRP:
Now: $49.95
Was:
The original rally Quattro debuted in 1980, and was very much based on the road-car versions of the car, but with a highly tuned 300bhp engine. In 1981, Audi Quattro works driver Michele Mouton...

MSRP:
Now: $189.95
Was:
After featuring the legendary eras of Group B and Group 4 rallying, McKlein Publishing has now dedicated a book to the early years of the sport. “Group 2 - The genesis of world rallying”...

MSRP:
Now: $195.00
Was:
By: Doug Boyce . Book Description The growth of drag racing from the late 1950s through the 1980s was nothing short of spectacular, and Bill "Grumpy" Jenkins was there through all of it...

MSRP:
Now: $99.99
Was:
By: Darwin Holmstrom . Description The birth of the muscle car revolution can be summed up in three simple letters: G-T-0. The release of Pontiac's GTO rocked the performance car world in 1964...

MSRP:
Now: $45.95
Was:
By: Haynes . Home Mechanic provides a wealth of information on the workings of the modern automobile, together with trouble shooting, service, repair and testing procedures for the majority of the...

MSRP:
Now: $249.99
Was:
By: Darwin Holmstrom . In 1963 Pontiac's Chief Engineer John DeLorean and his two favorite staff engineers, Bill Collins and Russ Gee, came up with an inspired way to keep Pontiac cars in the...

MSRP:
Now: $129.95
Was:
By: Sam Dawson . Get behind the steering wheels of more than 50 of the most glamorous, beautiful, fast and capable cars of the fifties, sixties and seventies in this, the first of a series charting...

Guide To Racing Cars - From Grand Prix Racing to Karting