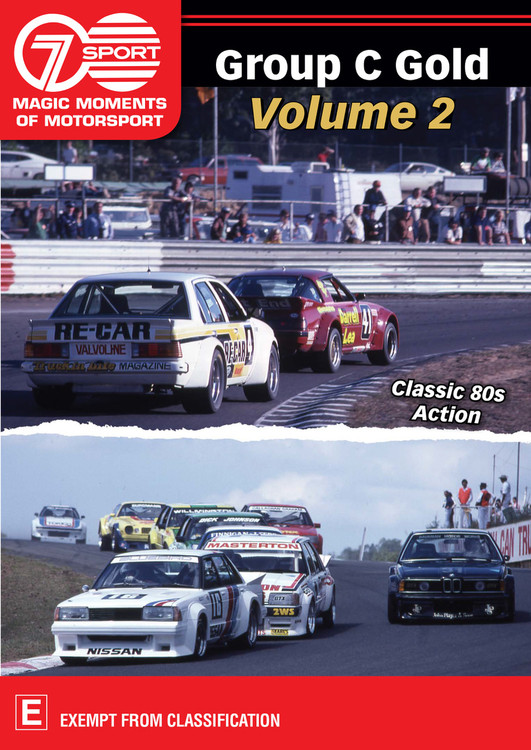 This race was salvaged from tapes thought to be irretrievable, but our hard-working archive team have managed to save a real racing gem and we’ve included it on this DVD for you to enjoy.

It’s a 155-lap race around the tight and twisty Amaroo Park, a circuit in Sydney that sadly no longer exists. On this DVD we have the full race, including all of the vision not aired on the day while viewers were busy at home watching commercials – this makes this release a must-have.

The 20 car field is made up of cars from the golden era of Group C racing – Commodore V8s, rotary-powered Mazdas, Ford Falcon V8s, a Capri, Nissan Bluebird Turbo and even a BMW 635 CSi!

Star drivers Allan Grice, Larry Perkins, Jim Richards and George Fury tackle a handy field of racers in this 300-kilometre endurance race that served as a warm-up for that year’s Bathurst 1000.

On this release we’ve also included the opening round of the 1984 AMSCAR Series, also held at Amaroo Park.

A track-specific series for touring cars, this round features the big V8 Falcons of Dick Johnson and Steve Masterton up against the Nissan Bluebird of Gary Scott, BMW of Jim Richards and a whole host of local Sydney racers keen to claim some big name scalps on their home track.

This DVD is a must-have for your collection of Seven Sport Magic Moments of Motorsport titles, celebrating a sensational era of Australian touring car history.

MSRP:
Now: $39.95
Was:
Aussie touring car favourites from the 70s and 80s THIS release marks the start of a new ‘series within the series’ for Seven Sport’s Magic Moments of Motorsport DVD titles celebrating a much-loved...

MSRP:
Now: $39.95
Was:
Aussie touring car favourites from the 70s and 80s THIS release marks the start of a new ‘series within the series’ for Seven Sport’s Magic Moments of Motorsport DVD titles...