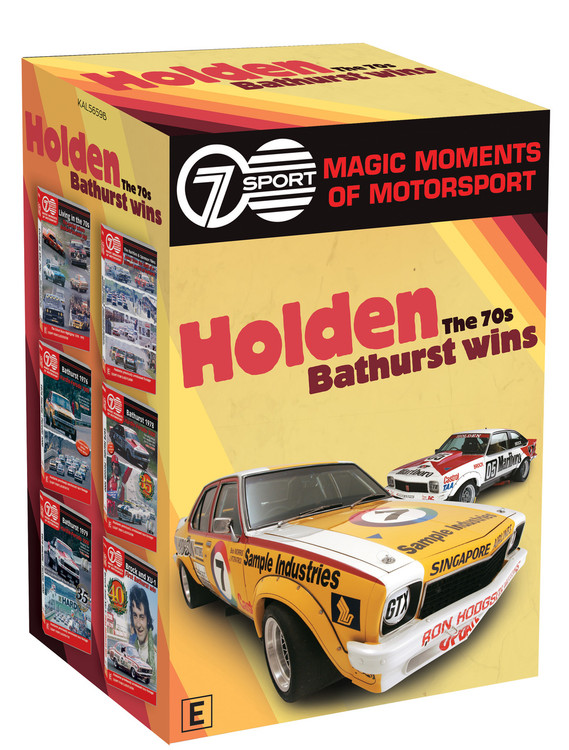 The 1970s were an amazing time for Holden – and an even better time to be a motorsport fan. It was a decade where Holden ruled Bathurst in the annual October classic. Not only claiming 5 race wins but also discovering a new superstar by the name of Peter Brock, who took his 1st Bathurst win in 1972. This very special box set covers all the Holden victories in the 70s, a period of immense change in the race. Transitioning from it’s original 500 mile race distance to a 1000km in 1973 as well as covering a change to colour TV broadcast, many say this was the ‘golden era’ of Australian Motorsport with showroom favourites modified for racing putting it all on the line for victory at Bathurst. On this six DVD set we look at the early period where Bathurst became big, featuring highlights of the race in 1972 and 1975. Plus we take a look at rarities and sponsor films featuring gems from the vaults of a brilliant period of Bathurst, the films and the quality aren’t 100% but they are gems that need to be seen. Then we have stand-alone wins being 1976 with almost the complete telecast spanning just over 5 hours. The 1978 and 1979 discs feature the complete telecasts of the race. As a special bonus we have included Brock and XU-1 40 year anniversary DVD.

Holden and its mighty Torana ruled the mountain and paved the way for all those that followed.

MSRP:
Now: $80.00
Was:
As we farewell Holden this limited edition box set features all of Holden’s victories at Mount Panorama during the 80s in full, yes the full TV coverage of the event. The Holden Commodore won...

MSRP:
Now: $39.95
Was:
THE first Super Speedway where NASCAR stock cars hosted a race outside North America, the Calder Park Thunderdome in Melbourne was the late Bob Jane’s dream that he turned into a reality. It...

MSRP:
Now: $33.00
Was:
HOLDEN'S HERITAGE 60th ANNIVERSARY book LIMITED HISTORIC OPPORTUNITY. A truly remarkable opportunity to own a piece of Holden history. A clean out in a defunct Holden dealer discovered stocks of...

MSRP:
Now: $39.95
Was:
THE 1992 Australian Touring Car Championship was a classic contest between Nissan, Ford, BMW and Holden and, on this special Seven Sport’s Magic Moments of Motorsport DVD release, we take a...

MSRP:
Now: $39.95
Was:
This book takes the Immortals concept made famous in cricket andapplies it to motorsport, choosing the best of the best from Bathurstand the Australian Touring Car Championship (now the Supercars...