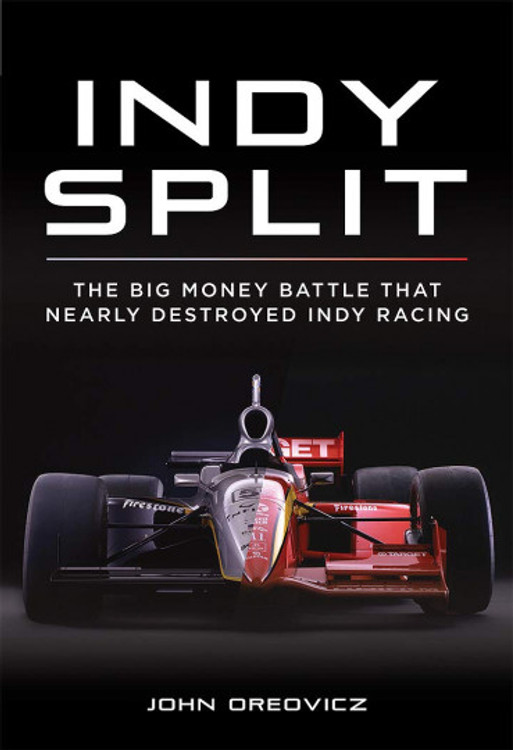 Indy Split is a fascinating, authoritative and overdue account of the big money battle that nearly destroyed the sport of Indy car racing. In the new book that will be on shelves in time for the 2021 Indy 500, long-time motorsports reporter John Oreovicz dives deep into the divisive battle between CART and the Indy Racing League. With insightful reporting, Oreovicz recounts the political infighting within the industry which climaxed with a 12-year "Split" from 1996 to 2007 between competing forms of Indy car racing and prevented the sport from achieving its potential.

The book traces the roots of Indy car racing's dysfunction, which began in 1945 when Tony Hulman rescued the Indianapolis Motor Speedway from potential redevelopment. Over the next 75 years, the Hulman-George family used the stature of the Speedway to carve out a powerful position in American auto racing that sometimes resulted in conflict with Indy car competitors. A volatile period in the late 1970s sparked the formation of Championship Auto Racing Teams (CART), and tensions ramped up even more when Hulman's grandson, Tony George, assumed power in 1990.

In unprecedented detail, Indy Split uncovers how the Split forced Indy car fans, sponsors, broadcasters and participants to choose sides. The book brings to light the confusion and animosity which caused unnecessary damage to the sport, and covers how negotiations driven by legendary racer Mario Andretti and actor/racer Paul Newman ended the Split in 2008, only to have George to walk away less than three years later. The long struggle for stability was finally resolved in 2020 when Roger Penske acquired IMS and the IndyCar Series, securing a bright future for the Speedway, the Indy 500, and the sport.

Longtime motorsports reporter John Oreovicz began attending the Indianapolis 500 as a teenager in the late '70s, allowing him to witness the sport's growth as an avid fan before documenting its decline as a journalist. With a foreword by Motorsport Hall of Fame inductee Robin Miller, arguably Indy car racing's most vocal advocate, this is the real story of The Split from one of the sport's most respected voices.

A Revolution at Indy DVD

MSRP:
Now: $69.95
Was:
By: Karl Ludvigsen . For the Old World, caught up in the traumas of a bitter conflict, America?s Indianapolis 500-mile race was a New-World beacon of auto-racing speed and excitement during the...

MSRP:
Now: $35.00
Was:
Supercars: The Holden vs Ford Era is a fitting tribute to a golden period of Australian motor racing. It’s a season-by-season review of the V8 championship’s evolution between 1993 and...

MSRP:
Now: $19.99
Was:
The stories of Australian Motorsport legends are told in a series of new children's books by experienced journalist and Parked Up podcast host Grant Rowley. This 28 page book tells the story of...

MSRP:
Now: $99.95
Was:
The stories of Australian Motorsport legends are told in a series of new children's books by experienced journalist and Parked Up podcast host Grant Rowley. The five 28-page books are: Gentle...