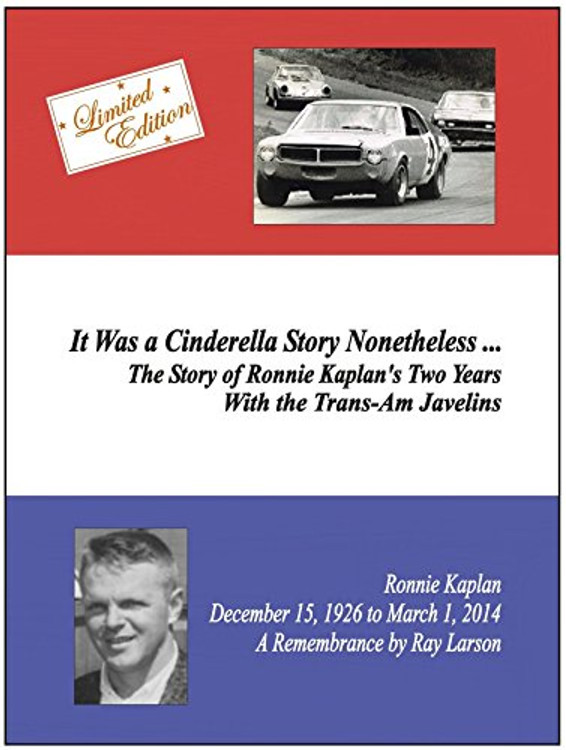 It Was a Cinderella Story Nonetheless.. The Story of Ronnie Kaplan's Two Years With the Trans-Am Javelins

LIMITED to 500, Signed and numbered by the author

In the fall of 1967 Ray Larson asked Ronnie Kaplan a one sentence question about what he thought his chances were with the Trans-Am Javelins. Ronnie answered with a one sentence observation. They did not meet again for 45 years. By then, Ronnie was able to tell Ray ... how it all turned out.

This story is partly a tribute to, and partly a vindication of Ronnie Kaplan, and to a lesser degree American Motors Corporation.

It poignantly talks about "what could have been," both for Ronnie and for American Motors.

Ronnie Kaplan's life began in 1926, when the automobile was coming of age. He was bitten by the "race bug" early on and started his career as a driver in 1947 in the Chicago based Hurricane Hot Rod Association. He later graduated to midgets, sprint cars, stock cars and a few rides in a champ car with his sights set on the Indianapolis 500. Several accidents brought about early retirement as a driver. The "race bug" didn't leave Ronnie. He stayed in the game as a mechanic, designer, builder, and team manager. He did whatever it took to stay involved. He has prepared cars that competed very successfully in almost all venues of motor competition. From Indy to Daytona (on the beach and the oval) and in almost all the tracks and road courses between, including events like the Mobil Gas Economy Run, Pure Oil Trails and Bonneville.

In the late 1960's, American Motors introduced the Javelin. This machine made its debut into the racing world, guided and developed by none other than Ronnie Kaplan. This book, written by a fellow Javelin lover and author, Ray Larson, takes you through those momentous years of Ronnie making yet another indelible mark in the history of the auto racing world with the AMC Javelins.