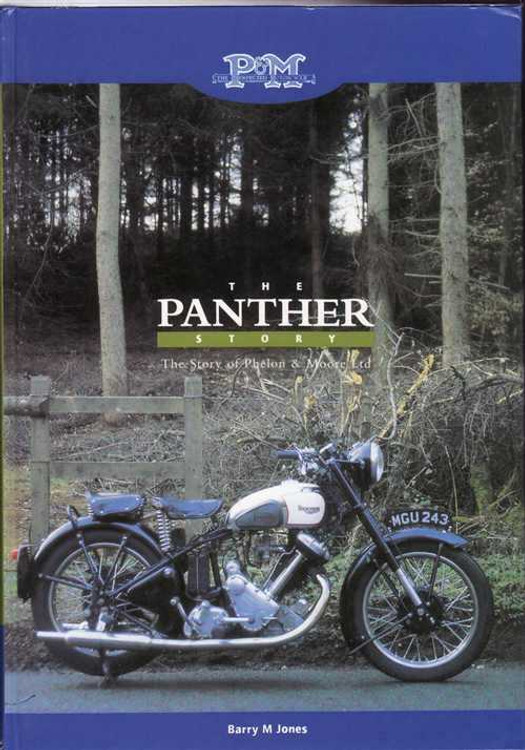 Phelon & Moore Ltd were one of the earliest and most successful of the pioneers of motorcycling. They outlasted many more famous names and the factory did not finally cease motorcycle production until 1966. From the beginning they produced solid, well constructed and reliable machines which performed well at home and throughout the colonies' to where many early P&Ms were exported. They gained a reputation for being superb Six Days Trials machines and were always well represented in endurance events both at home and abroad. However in the 20s and 30s P&M introduced the name Panther for their sporting models which were, and still are, surprisingly quick comfortable and reliable machines.
With a large single cylinder engine producing lots of torque well down the rev range and with their rugged build and reputation for reliability it was not surprising that Panthers became known as sidecar pullers. Perhaps not so well known was their reputation as innovators. From their very first days P&Ms and Panthers were always at the forefront of the technology of the period beginning with their use of the engine as an integral part of the frame; their championing of all chain drive; introduction of two and then four-speeed gears; the early adoption of overhead valves; twin dipping headlights; interconnected breaks and the airsprung Dowty fork.

There were a wide variety of Panthers made from lightweight machines using Villiers engines and the famous Red Panther selling at just f28/17/6 to the Panthette V-twin, the Princess Scooter and the most famous of all Panthers, the Model 100 600cc heavyweight. All are lovingly described in this book as well as the complete history of the company and people that made, rode and sold Panther motorcycles from their earliest days until the final Panther left the Cleckheaton works in 1966.

Panthers inspire now, as they have throughout their history, a remarkable loyalty in their owners and riders. If this book entices others to experience the joys of riding Panthers rest assured you will find it both intoxicating and addictive!

The Paddy Hopkirk Story - A Dash Of The Irish

MSRP:
Now: $195.00
Was:
By: Bill Price, Paddy Hopkirk . Our best-loved rally driver, Paddy Hopkirk, shot to fame when he won the 1964 Monte Carlo Rally in a Mini — the first in a stream of Monte victories for the...

MSRP:
Now: $150.00
Was:
Published by BMW Mobile Tradition, Hardbound, 111 Pages, Published, 2008 - **Very rare BMW issued book in excellent condition** For many, BMW coupes are the epitome of timeless elegance in the world...

The Packard Story - The Car and the Company (Reprint)

MSRP:
Now: $149.95
Was:
By: Robert E. Turnquist . Description Today with automobiles rolling off Detroit production lines every few seconds, it is hard to believe that not so long ago there were automobiles built to...

MSRP:
Now: $49.95
Was:
By: Dennis Ortenburger . First published in 1977, Dennis Ortenburger's - The Original Lotus Elite became an instant classic. It was the first definitive book written about the cars and reflected his...