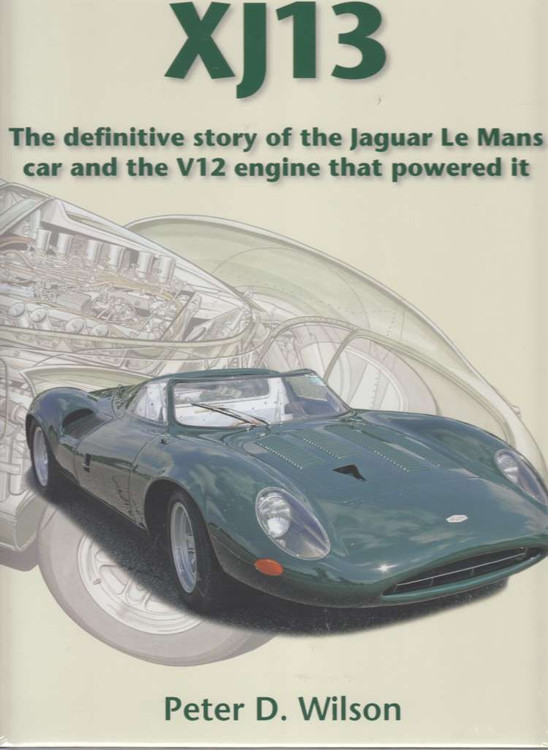 The definitive story of the Le Mans car and the V12 engine that powered it.

This book tells the inside story of Jaguar's fabulous Le Mans prototype – gloriously shaped by Malcolm Sayer and arguably the world's most famous race car never to have turned a wheel in competition! In some 300 pages and 600 illustrations, many in colour, every aspect of XJ13's origins, design, build and testing is covered by author Peter D. Wilson – who is uniquely qualified for this task because in the early/mid-1960s he was an engineer working in Jaguar's competition department and helped build the car.

The book also gives the first-ever detailed account of the fantastic 5.0 litre four-cam V12 engine which powered XJ13 (and which was intended to power Jaguar road cars too). This brings to light the extraordinary saga of Jaguar's intended purchasing of Lotus, with the carrot of a Jaguar V12 race engine for Colin Chapman's Indianapolis aspirations cleverly dangled by Sir William Lyons! A story which has never been told before, it includes a fascinating exchange of correspondence between those two wiley old campaigners, Lyons and Chapman.

Not only does Peter have personal knowledge of XJ13, he also interviewed key people in the story, including Mike Kimberley who was assigned the project after the sad departure of Derrick White to Cooper Cars (Mike went on to become chief executive of Lotus for many years). Then retired engine men George Buck,Jim Eastick and Frank Philpott, who developed the four-cam engine on the test-bed, also contributed their knowledge and helped Peter assess the significance of the many test reports which have been analysed for the book. These and large quantity of other key documents came to light during the hundreds of hours Peter spent researching in the Jaguar Heritage archives at Browns Lane, and a number of them are reproduced in full.

The book also explores other mid-engine designs which Malcolm Sayer proposed, including after the XJ13 project was shelved. It also tells how the eventual production 'flat head' V12 engine emerged from the original Baily/Heynes design (codenamed 'XJ6') which powered the XJ13, but which proved too bulky and complex for use in road Jaguars.

All in all, this is a detailed account of this extraordinary Le Mans Jaguar that is both technical enough to please the engineer, but also expressed in a way that even the layman can appreciate what it takes to design, build and test a sophisticated, 200mph+, V12-engined Le Mans car.

The main contents of the book in more detail are as follows:-

MSRP:
Now: $250.00
Was:
By: Paul Parker . Few motorsport events can compare with the Le Mans 24 Hours for prestige, glamour and engineering excellence. To win this epic race is an achievement for any manufacturer, but to...

MSRP:
Now: $129.95
Was:
By: Jaguar World Monthly . The story of the XJ40 is one of the most fascinating tales from Jaguar's `colourful' archives. It was a motor car that was conceived and developed during the company's...

Jaguar XJ220 - The Inside Story

MSRP:
Now: $69.95
Was:
By: Brooklands Books . The 12-cylinder engine was introduced in late 1972 making the XJ saloon outstanding in smoothness, silence and high performance. Almost immediately it came out in...

MSRP:
Now: $18.50
Was:
Having this book in your pocket is just like having a real marque expert at your side. Benefit from Nigel Thorley’s years of Jaguar experience, learn how to spot a bad car quickly, and how to...

MSRP:
Now: $69.95
Was:
By: Brooklands Books . It took several years for the XJ-S to be accepted as a car in its own right rather than as a replacement for the E-Type. By the mid-eighties it was a remarkably refined and...