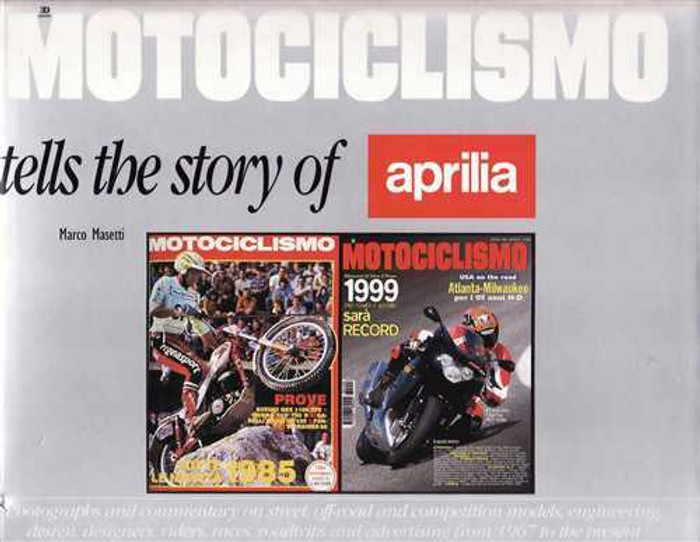 During the preparation of the "Motociclismo tells..." series, dedicating a 'history' book to a comparative youngster like Aprilia struck some people as rather paradoxical. Aprilia is at least 20 years younger than the other famous Marques and this, in the conservative opinion of some motorcycling historians, is seen as a shortcoming, something implying a lack of experience and something which necessarily excludes the company from any official motorcycle 'history'.

With this book we hope to prove the contrary. Making history is not just a question of clocking up the years. We hope to show that a flourishing Company widely  recognised as a major product innovator with a range stretching from SO to 1.000 cc, a Company consistently successful in sporting events, has every right to join the big names of world motorcycle Makers. In the otherwise narrow and provincial world of Italian motorcycling, Aprilia stands head and shoulders above the crowd and deserves a place on the motorcycling industry's roll of honour. During the research and collection of material or this book, we came to realise that there was a real risk that the early history of Aprilia, such as the details of the first off-road races and production models, might go lost altogether. This was another reason why it was high time for an Aprilia history. Not a history based on the anectdotageand nostalgia, but rather a record providing a vital link between the past and the present and that sense of belonging and identity which has become part and parcel of today's success stories.

As far as we are aware, this is the first book recounting the full history of the Aprilia Marque and we feel we ,can be rightly proud of our efforts. We hope you agree and hope that you will enjoy reading these pages from Italian motorcycling history.