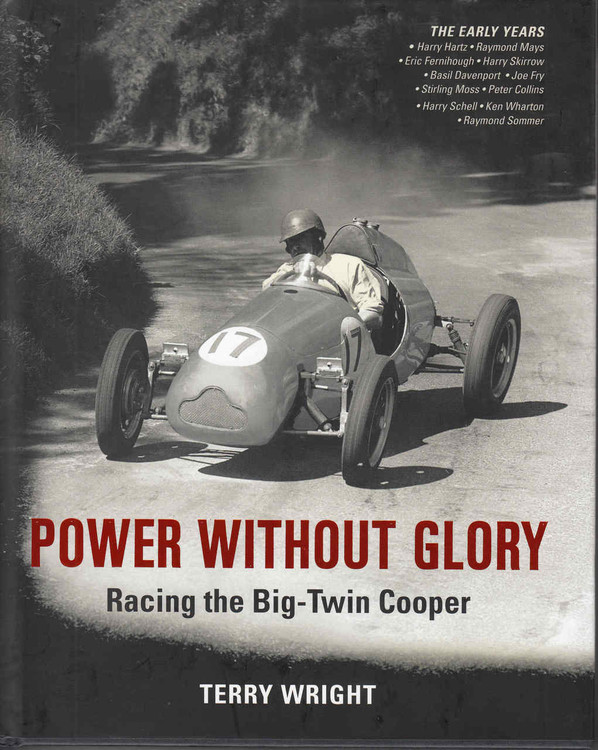 When Charles Cooper and his son John built their first racing car in 1946 little did they realize they were embarking on one of motor racing's greatest design revolutions. Two of their first customers were to be amongst Britain's greatest drivers, the young Stirling Moss and the even younger Peter Collins. Cooper cars gave them an affordable start when they were barely old enough to have a licence. Then the world motorcycle speed record JAP 8/80 V-twin engine was put in the back of the Cooper. With this brilliant combination of power and lightness, Moss, Collins and others set out to do battle against the front-engined might of ERA, Ferrari, Maserati, Cisitalia, Simca-Gordini, HWM and others. The big-twin Cooper went on to dominate British hillclimbing during the 1950's. The 1954 chassis was the prototype of the mid-engined design which swept Coopers to Formula 1 championship wins in 1959 and 1960. This book is a new look at the early history of the modern racing car. It explores the influences behind the first Coopers, looking back through the history of world record motorcycles, hillclimb and sprint specials and dirt-track speedway cars. The Cooper's mating with the V-twin JAP, and how the engine and the chassis developed, are illustrated by never before published factory drawings and hundreds of photographs. The racing and hillclimbing of the early post-war years are covered in depth. Cooper cars played a major part in propelling Britain into a leading position in world motorsport. Power Without Glory tells the story of how it all began.

Power Without Glory - book of the month:

Book of the Month in Octane, ‘you must buy this book’ by John Medley in  Oily Rag, ‘the most fascinating motor racing book I’ve ever read: bar none’ by Ray Bell in Auto Action, now we hear it is to be Book of the Month in the May Classic and Sportscar; indeed Editor in Chief Mick Walsh says it is a candidate for RAC Book of the Year. Here’s Ray Bell’s
review:

DEAN BUTLER ...I suspect this is one of those books that is going to become difficult to find over the years, and there will be a lot of people scratching their heads as to why they did not purchase a copy!

BOOK OF THE MONTH IN FEBRUARY OCTANE: ... adds in fascinating social history of the the period, which brings to life the wonderfully varied (and beautifully produced) archive pictures of cyclecars, midget racers and specials driven mostly sideways by their gung-ho owners ... for those images alone the book is worth every penny of the £55 cover price. That it's a great read as well is simply a huge bonus.

JIM SCAMMELL, Barossa Vintage Collingrove Hillclimb: Thanks for a wonderful wonderful book. One of THE BEST EVER additions to my home library.

JOHN STAVELEY in The Bulletin of the Vintage Sports Car Club: On first opening this heavy, well produced book it immediately becomes apparent that it is … a vibrant story of motor racing starting before the turn of the twentieth century but quickly moving on to post World War 2 airfield circuits.

… an important work, written in an entertaining style, beautifully illustrated and great value. What a good book! Highly recommended.

DOUG NYE, author of Cooper Cars on the Nostalgia Forum : … a beautifully-designed, very well-produced, highly detailed and sophisticated piece of engineering and sporting history—really well worth the money. Respect!

He has spread his remit to cover the entire background story of small capacity competition cars after much diligent research, and deals with the nativity of the 500cc movement itself in really interesting depth. I rate it as an important, hefty, and good looking addition to any real motor sport enthusiast’s book shelf.

ANDREW KING: Thank you so much. The book has just arrived. Even a brief perusal proves it to be a superb production, painstakingly researched. It is brilliant.

JOHN MEDLEY in The Oily Rag: This is a marvellous book. You should buy it. It is filled with fascinating detail, a clear story line, broad and deep in its history and humanity, astonishing in its memorabilia and automobiliana, the author’s research and footnoting a model for other writers, the author’s hands-on experience in the field impeccably unmatched … The book is well produced, thoughtfully designed, and too heavy to read in bed.

DAVID MOORE, Shelsley Walsh archivist in MAC News: This excellent book is so much more than the title suggests as it covers a wide motor racing history … the JAP and Vincent units are fully illustrated by the author who clearly knows his subject in great depth … Interestingly, the author not only describes the origins of the cars themselves but also paints vivid pictures of the motor racing, social and political scenes of their eras.

JERRY STURMAN in Speedscene, journal of the Hillclimb and Sprint Association: Fills a significant gap in motorsport history … All enthusiasts will want to have this one on their shelves … Entertainingly written and superbly laid out … the book is a visual treat as well as being a meticulously researched, in-depth survey of the history and development of the motorcycle V-twin engine in competition.

MIKE COOPER, Managing Director, Cooper Car Company Ltd: I have been buried in the book all weekend. It is a fascinating read and I am sure many other motor racing enthusiasts will really enjoy it.

Ford - The Dust And Glory A Racing History

The Power and The Glory (David Sedgwick)