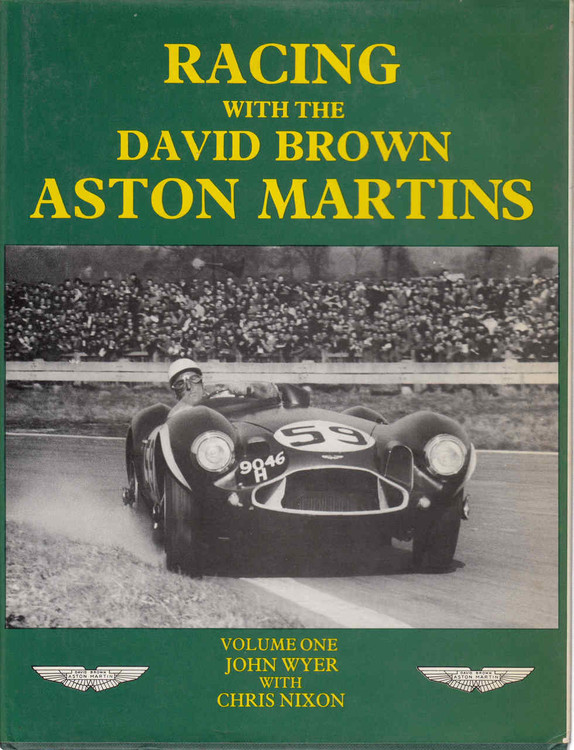 JOHN WYER is a legendary figure in motor racing. and, with Alfred Neubauer, stands unchallenged as one of the twd greatest Team Managers the sport has ever known.

He joined Aston Martin in 1950, after running Dudley Folland's team for the previous two years, and that was the start of the legend. With the Feltham &wipe, he immediately established a reputation for meticulous attention to detail and a complete mastery of administration and logistics — vitally necessary with a team comprising from three to five cars and as many as fifty personnel.

In 1957 David Brown appointed him General Manager of Aston Martin-Lagonda, Ltd., and his great friend Reg Parnell took over as Team Manager. This allowed John to concentrate on the development and production of the superb DB4, having already instigated the design of the racing DBR1, which was to bring David ,Brown his long-sought Le Mans victory in 1959, together with the Sports Car World Championship.

In 1963 Wyer joined the Ford Motor Company to run its racing programme and, after a shaky start in 1964 and 1965, the Detroit giant went on to win Le Mans in 1966 and 1967, with cars prepared and raced by Carroll Shelby and John Holman. During this period Wyer's responsibility was to build the cars in Slough, England, but in 1968 and 1969 he gave Ford two more victories at Le Mans with the Gulf GT40s.

At the end of 1967 he had formed JW Automotive and this company's associaton with Gulf also won them the World Championship of Makes in 1968. They repeated this success in 1970 and '71, this time with the fabulous Porsche 917s. In 1975 John master-minded his fourth Le Mans victory (with the Gulf Mirage) and shortly afterwards retired, following a truly remarkable career. He now lives in the South of France with his wife, Tottie, and their daughter, Pia.

John Wyer has already written one book, 'Motor Racing Management' (published in 1956) and is currently working on his autobiography.

CHRIS NIXON has been an Aston Martin enthusiast since the early fifties when, as a schoolboy, he filled exercise books with magazine cuttings of the Feltham team's exploits instead of doing his prep.

In 1958 he joined the staff of AUTO SPORT and the two high points of his five-year stay with the magazine were reporting Aston's 1959 Tourist Trophy victory and a weekend spent with a DBR I driven by Jack Fairman.

In 1963 the more lucrative world of television beckoned and a few years later he moved on into the film industry where he remains, working as a freelance Publicity Director. Compiling the two volumes of 'Racing With The David Brown Aston Martins' has taken two years and given him immense pleasure.

MSRP:
Now: $199.95
Was:
By: Anthony Pritchard . The DBR9s that battle with the Corvettes and Maseratis on the race circuits of the world today are the latest in a line of competition Aston Martins that stretches back...