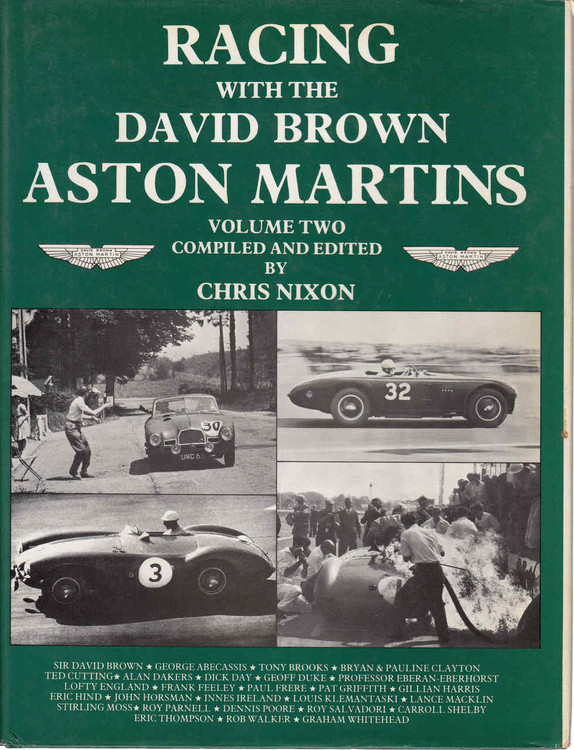 This book is the companion volume to John Wyer's year-by-year account of his thirteen seasons of 'Racing With The David Brown Aston Martins'. Having obtained John's fascinating official history of the Feltham equipe, Chris Nixon then set out to get the somewhat less official ) but equally fascinating recollections of many of the men Id women who were part of the team in the fifties and trly sixties.

Altogether Chris interviewed twenty-eight people — rivers, designers, mechanics, engineers, secretaries and Lhers — and this volume comprises the edited transcripts those interviews which, illustrated with nearly two hundred photographs, affords the reader a unique, first-and view of a remarkable team which took part in the olden Age of sports car racing.

It is doubtful whether such a book could have been written about any team other than Aston Martin. Only one [her marque — Ferrari — raced continuously throughout that tremendous decade and whilst it and others achieved great success, none can claim to have been held in the same extraordinary affection and esteem by its personnel as was Aston Martin.

David Brown and John Wyer chose their people with great care, giving the team a personality all its own, so much so that all concerned were apparently aware [ the time that they were part of something very special.

One reason, no doubt, why so many stayed with Astons for so long.

Today, in the eighties, sports car racing is, sadly, on-existent and what motor racing there is is smothered by rampant commercialism.

CHRIS NIXON has been an Aston Martin enthusiast since the early fifties when, as a schoolboy. he filled exercise books with magazine cuttings of the Felthamam's exploits instead of doing his prep.

In 1958 he joined the staff of AUTOSPORT and the two high points of his five-year stay with the magazine were reporting Astons' 959 Tourist Trophy victory and a weekend spent with a /BR1 driven by Jack Fairman. I

n 1963 the more lucrative world of television beckoned and a few years later he toyed on into the film industry where he remains, working as a freelance Publicity Director. Compiling the vo volumes of 'Racing With The David Brown Aston Martins' has taken two years and given him immense pleasure.

MSRP:
Now: $199.95
Was:
By: Anthony Pritchard . The DBR9s that battle with the Corvettes and Maseratis on the race circuits of the world today are the latest in a line of competition Aston Martins that stretches back...