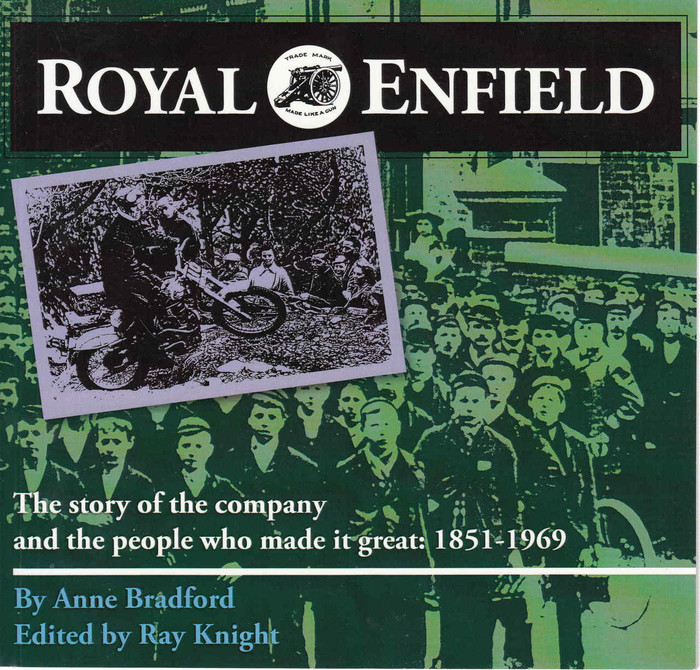 On the wall of Major Mountford's office was a map with a flag for every agent and you could see that we had an agent in every country of the world.

We even had one in Guatemala, in fact we supplied the President with a splendid white twin (motor bike) with a mounting for a machine gun across the handlebars, between the two grips.

A couple of weeks after it was delivered somebody tried to assassinate him so he sent for some black enamel paint.'

0ver 80 ex-employees and their descendants give perceptive and often humorous accounts of life in the Enfield works, charting its expansion from a humble needle factory into one of Britain's best known motorcycle manufacturers.

Contributions include Enfield-trained Bill Lomas, double World and British motorcycling champion, and Johnny Brittain who describes how he became the youngest member of the British winning team in the 1953 International Six Days Trial.

They create a company renowned for its family atmosphere, where generation succeeded generation — a company whose expertise not only produced first class motor cycles like the Bullet, the Crusader and the Interceptor but also pioneered air-cooled diesel
engines and were even involved in the development of atomic energy.

The concluding stories are by those who worked there during the final ten years, when the company was reduced from a workforce of over 1,500 to one employee in the front room of a terraced house.

TAKE RISK! The Amazing Story Of The People Who Made Richard Noble's Extreme Projects Possible On Land, At Sea And In The Air