Scrambling For Enthusiastic Beginners : How I Survived the 1960s With A Smile (Frank Melling, 2021) 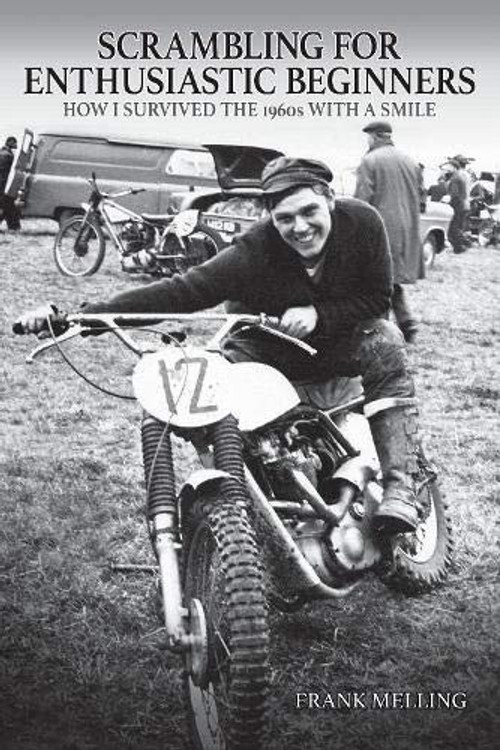 Scrambling For Enthusiastic Beginners : How I Survived the 1960s With A Smile (Frank Melling, 2021)

If you were a champion motorcycle racer, captain of the school rugby team and had the girls queuing up for a date, this is not the book for you.

“Scrambling For Enthusiastic Beginners” is the story of what happens to an extremely ordinary young man as he struggles to grow up in the “Swinging 60s”.

The people in the know always say: “If you can remember the 1960s, then you weren’t there…”

This is probably true for the rock ‘n’ roll superstars – but Melling was most definitely there!

In 1960, he remembers getting a good smack from his mum when his home made cannon blew up and burned a hole in his school sock.

He can also recall his super smooth chat up line when he discovered girls. It was “Hiya.” There was nothing else: just the single word because that’s all he had.

When he began work as a labourer, Melling was at the epicentre of the corruption and incompetence which pervaded every part of British industry and nowhere more so than the British motorcycle manufacturers.

There were tears and laughter but all the time there were motorcycles as his saviour - buying, selling, riding, racing and inculcating a passion which burned into his very soul. Bikes were Melling and Melling was bikes – then and still now.

So this is the story which you will not read elsewhere. Not that of a rock star, surrounded by hordes of beautiful girls, or a World Champion spraying champagne from the top step of the podium.

This is the tale of the most naïve young man in the universe, ricocheting from one disaster to another in his efforts to grow up – truly, scrambling for an enthusiastic beginner.

MSRP:
Now: $40.00
Was:
“A Penguin in a Sparrow’s Nest” is far more than a story about motorcycling and journalism. Instead, it recounts the inspirational journey of a sixteen year old who left his Council...

MSRP:
Now: $35.00
Was:
Classic Superbikes - Inside Stories of the World's Greatest Classic and Retro Bikes (Frank Melling, 2020) - Magazine size book. This book tells the stories behind the world's greatest classic...

Ride of My Life - Frank Melling

MSRP:
Now: $30.00
Was:
magazine size book Frank Melling is the one motorcycling journalist who has every t-shirt in the biking world. From riding the latest Retro bikes to throwing a leg over the legendary eight cylinder...

MSRP:
Now: $100.00
Was:
More Than 50 years after production of the classic Norton Commando Ended, this is still admired as one of the greatest bikes of all time. Designed in a hurry for the 1967 launch, and manufactured on...

MSRP:
Now: $40.00
Was:
“A Penguin in a Sparrow’s Nest” is far more than a story about motorcycling and journalism. Instead, it recounts the inspirational journey of a sixteen year old who left his Council...

MSRP:
Now: $49.00
Was:
For fifty years, Britain made the best toy cars in the world, expertly shrinking every kind of reallife vehicle and producing them in their countless, die-cast millions. Dinky Toys were the 1930s...

MSRP:
Now: $89.95
Was:
By: Matthew Vale . Description The Commando was the main bike in Norton's range from 1968, and was produced until the demise of Norton Villiers Triumph in 1977. The bike featured the unique...

British Motorcycles of the 1940s and 50s

MSRP:
Now: $29.95
Was:
By: Mick Walker . Description After VE Day in 1945 the British population returned enthusiastically to the road, but the cost and scarcity of both vehicles and fuel led to the post-war scene being...

MSRP:
Now: $50.00
Was:
The British Grand Prix is the oldest race on the Formula 1 calendar, having entertained race fans for over seventy years - and from Kent to Liverpool, the Mirrorpix photographers have been there...

MSRP:
Now: $190.00
Was:
Italian & English text (at the back of the book, see images) The volume traces the entire history of Alfa Romeo through the analysis of the most stimulating events, linked to the most famous...

MSRP:
Now: $180.00
Was:
A fascinating story, in which the artistic genius of the founder dominates, finding a worthy follower in his son Sergio, an engineering graduate, in the tradition of the typical Pininfarina...