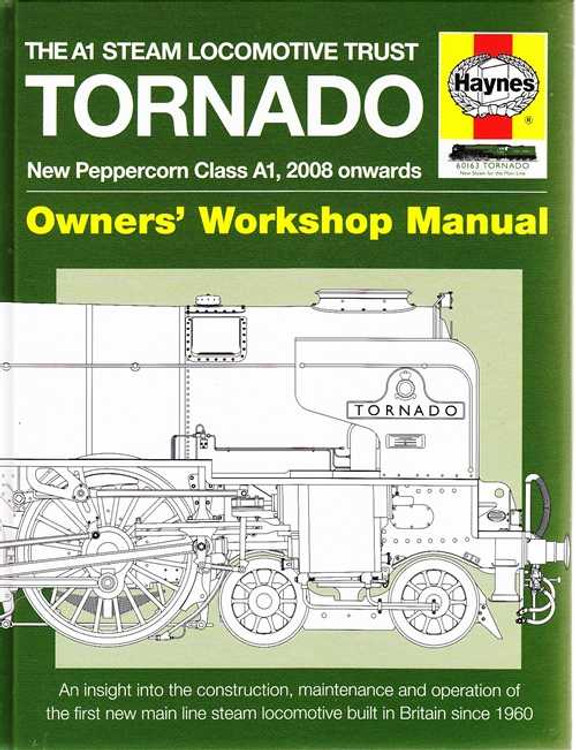 An insight into the construction, maintenance and opeartion of the first new main line steam locomotive built in Britain since 1960.

As steam traction was withdrawn from the British Railways network in the 1960s, with it disappeared one of the most iconic express locomotives of the East Coast main line — the Peppercorn Class Al. Described by some as the greatest express locomotive ever built, and despite having a relatively short service life (less than 15 years in some cases), none of the 49 examples of the class went into preservation.

Many steam enthusiasts saw this as an unacceptable omission from the steam locomotive preservation movement, and in 1990 a group was formed with the seemingly impossible dream of building a brand new Al, as faithful as possible to the original Peppercorn design. Some 18 years, much heartache, and Mm later, the dream became reality, when in late 2008 the fiftieth Al, 60163 Tornado, ran on BR tracks for the first time.

Following testing and certification. 2009 saw this new locomotive hauling excursions on the main line throughout the UK, as well as attending many of the preserved heritage lines as a visitor. The interest which this project has generated from the general public, many of whom have never taken any interest in steam locomotives before, has opened up a new era in the steam heritage movement. Hopefully this will safeguard a vital part of Britain's industrial heritage for generations to come.

This book tells the story of the project, describing:

Geoff Smith is a Chartered Engineer with a career history spanning over 40 years in energy and environmental management. He is a life-long steam locomotive enthusiast, having spent many of his formative years watching the original Peppercorn Als at Doncaster. He is a long-time supporter of, and active contributor to, the Tornado project, and became a volunteer in 2008, following early retirement.

MSRP:
Now: $34.95
Was:
New Peppercorn Class A1, 2008 onwards This is one of the new Icon titles from Haynes. Published in association with The A1 Steam Locomotive Trust, it explains the construction, operation and...

MSRP:
Now: $169.95
Was:
Author: Sergio Limone & Luca Gastaldi, Paperback, Published in 2017, 404 pages This book is a collection of notes dedicated to all those who helped the engineer Sergio Limone to "play with...

MSRP:
Now: $99.95
Was:
By: Mick Walker . The AJS name is one of the proudest in motorcycling racing history. The only 350 ever to have won the Senior TT was an AJS, the AJS Porcupine was the first motorcycle to win the...