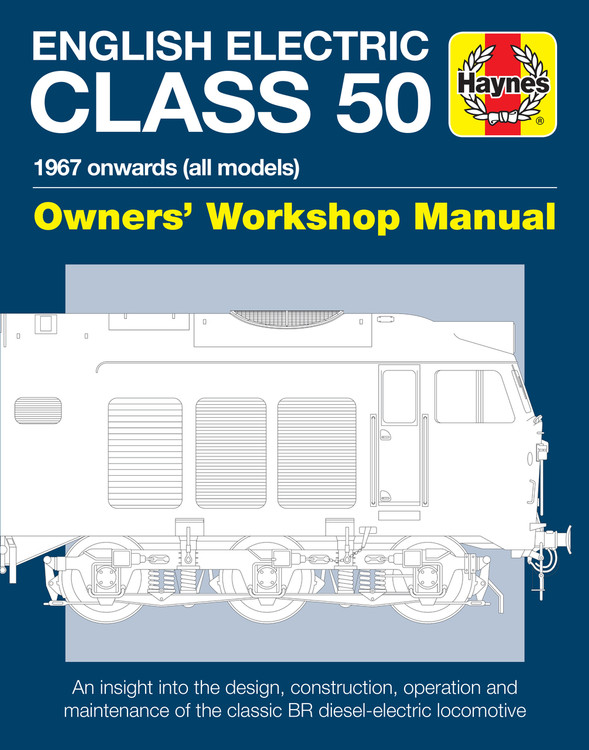 The Class 50 locomotives were built by English Electric between 1967 and 1968, and 2017 marks the 50th anniversary of the locomotive’s debut.

Fifty examples were built, and were initially used to haul express passenger trains on the West Coast Main Line between Crewe and Scotland. Class 50s were nicknamed ‘Hoovers’ by rail enthusiasts because of the distinctive sound made by the air-filters originally fitted. The Class 50s were later moved to services in the south west of England, primarily on the mainline from London to Exeter, and were eventually retired from service in 1994.

In the late-1970s BR was persuaded to name the class 50s after Royal Navy Vessels with notable records in the First and Second World Wars, and in January 1978 50035 was named Ark Royal by the captain and crew of then current aircraft carrier HMS Ark Royal. The rest of the fleet was named during the course of the next few years. The Class 50 has always been popular with railway enthusiasts, and 17 of the original 50-strong fleet are currently preserved.

This Manual provides a fascinating insight into the design, manufacture, operation and restoration of the Class 50.

Author: Jarrod Cotter has contributed to numerous railway and aviation magazines, and is a former railway magazine editor, and former Editor of Aviation Classics and Aeroplane Monthly. He has a particular passion for the Class 50, and is a Member of 'The Fifty Fund'. He is also author of Haynes Bristol Blenheim Manual and Sopwith Camel Manual and co-author of the Avro Lancaster Manual and P-51 Mustang Manual.

MSRP:
Now: $54.95
Was:
The Lola T70 was developed by Lola Cars in 1965 for sports car racing – Lola built the chassis, which were typically powered by large American V8 engines, predominantly Chevrolets and Fords. The T70...

MSRP:
Now: $65.95
Was:
By: Brian McCarthy . Introduction Anyone who has any involvement with engines, will have, at some stage or other, encountered a failure of a component and been placed in a position of having to...

MSRP:
Now: $59.95
Was:
Hardcover, Published in 2017 The bestselling author of Long Way Round details his recovery from a major accident On February 16, 2016, Charley Boorman suffered a major traffic accident in Portugal...