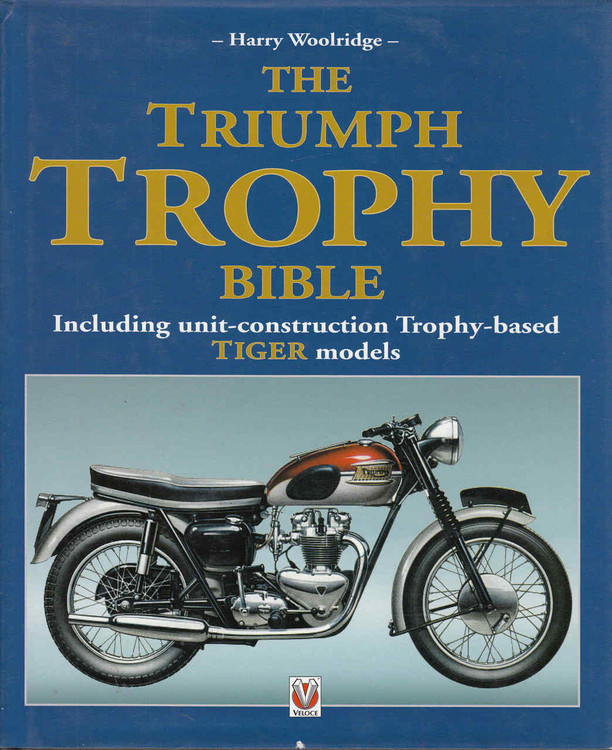 Here is the definitive history of Triumph's hugely popular Trophy model, including the unit- construction Tiger models derived from it.

Much more than a history, this book is The ultimate single source of detailed information for owners and would-be owners of these classic Triumph twins: in fact, it is the Trophy Bible.

Between these covers will be found year-on-year development history from 1949 to 1983, engine and frame numbers, model type identification, colour schemes, complete technical specifications of every model and details of the Trophy's international
achievements. Additionally, factory photographs show each model in authentic original detail.

Ideally qualified to research and write this work, Harry Woolridge spent 30 years at Triumph's famous Meriden factory and has owned almost every Triumph from Terrier 150cc to Trident 750cc, as well as a few pre-war models. Also the author of a highly rega

After National Service in the Royal Air Force Harry Woolridge applied for a job in the Service Department at the Triumph Engineering Company, and was lucky enough to be selected.

Thus began a working relationship with Triumph and its motorcycles that would last thirty years: an experience Harry says he would not have missed at any price.

After a few years in the Service Department, Harry joined the team in the Experimental Department until he was promoted to the position of Assistant Quality Control Manager.

Later, in a reshuffle of titles, he became Inspection Foreman for Motorcycle Assembly and Production Development. With the formation of the Meriden Co-operative, Harry served as Warranty/Service Manager until the factory closed in 1983.

MSRP:
Now: $89.95
Was:
By: Matthew Vale . Description The unit-construction 650cc Triumph B' series twins were the top-of-the-range models in Triumph's range from their introduction in 1963 through to the...

MSRP:
Now: $295.00
Was:
The Triumph Tiger Cub Bible (Mike Estall, 2003) - 2nd hand book in excellent condition. Incredibly comprehensive, this book is the ultimate reference source to every aspect of these machines,...

The Type VII U-Boat (Anatomy of the Ship Series)

MSRP:
Now: $69.95
Was:
By: Brian Bate . This manual provides an insight into buying, building, maintaining and using light trailers safely and legally. Coverage extends to all types of common trailers, including car and...