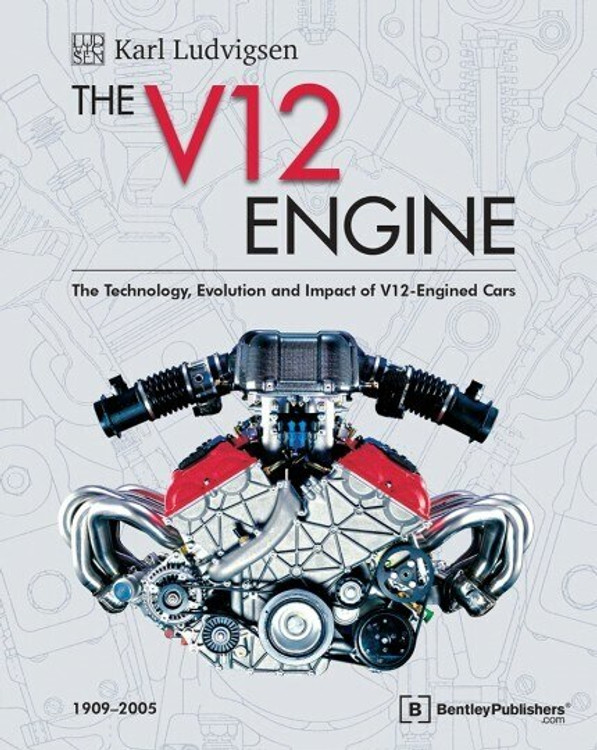 The V12 Engine gives an unprecedented and in-depth overview of the historic V12-powered cars and the magnificent engines that powered them.

In this richly illustrated volume, author Karl Ludvigsen takes the reader behind the scenes of the creation of the greatest V12 engines of all time, recalling the effortless urge of the luxurious Hispano-Suiza of the 1930s and the scintillating surge of the Lamborghini supercars of the 1960s.

Lavishly illustrated and meticulously researched, The V12 Engine explores the great 12-cylinder racing and production cars that made automotive history. Karl Ludvigsen, award-winning automotive historian and author of the acclaimed Porsche: Origin of the Speciestakes his readers behind the scenes to witness the development and influence of the mightiest auto engine.

Biggest of all production twelves was Hispano-Suiza's Type 68-bis of the 1930s, whose 11.3 litres produced 250 bhp. It displaced a stunning 50 percent more than America's largest twelve of the classic era, the Pierce-Arrow. Driving such a 68-bis, one driver credited it with a "mighty, effortless surge of power which completely grips the imagination."

At the other extreme was Ferrari's first V12 of 1947 measuring only 1.5 litres. Powering both road and racing cars, it was the foundation stone of Ferrari's exotic reputation. Inspiring Enzo Ferrari was his fond memory of a racing car built by America's Packard, first to offer a production V12 in 1915. Ferrari's exclusive production is the opposite of America's Lincoln, which put 220,000 twelves on the roads of the world.

Not all V12s were successful. Lagonda had mixed fortunes with its twelves and Rolls-Royces Phantom III was an epic loss-maker. Cadillac left its "V-Future" V12 in the garage while Mercedes-Benz made only a handful of its twelves before World War II stopped play. Among Formula 1 entries the efforts of Porsche, MGN and Life were pitiful flops while Honda, Ferrari, BRM and Matra enjoyed success.

Ludvigsen also explains how and why twelves evolved as they did and introduces such major movers as Jesse Vincent of Packard, Sunbeam's Louis Coatalen, Louis Delage, W.O. Bentley, Sir Henry Royce, Hispano's Marc Birkigt, Ferruccio Lamhorghini, Sir William Lyons of Jaguar, Bugatti's Paolo Stanzani and, of course, Enzo Ferrari. He brings to life their struggles to achieve their aims and quotes contemporary verdicts on their cars.

Ferrari's fabulous Enzo V12 brings the story up to date, along with contemporary twelve-cylinder engines from Mercedes-Benz, Lamborghini, BMW, Maybach, Aston Martin, Maserati and Rolls-Royce, and such newcomers to the V12 ranks as Toyota, Bentley, Volkswagen, Cadillac, Peugeot and Audi.

Blending business with technology, racing with record-breaking and luxury carriages with supercars, The V12 Engine takes the reader on a high-speed journey through some of the most exciting and exotic cars ever made.

Driving Force The Evolution Of The Car Engine

MSRP:
Now: $195.00
Was:
By: Jeff Daniels . What was the first truly modern car engine? It may be an impossible question to answer even with hindsight - but hindsight is what Driving Force provides. From the first stuttering...

The Very Best of Volkswagen

MSRP:
Now: $99.95
Was:
By: VolksWorld, Trevor Legate . There are automobile enthusiasts and I then there are VW enthusiasts. Many people think they are one and the same, but the VW fan is dedicated, focused and committed...