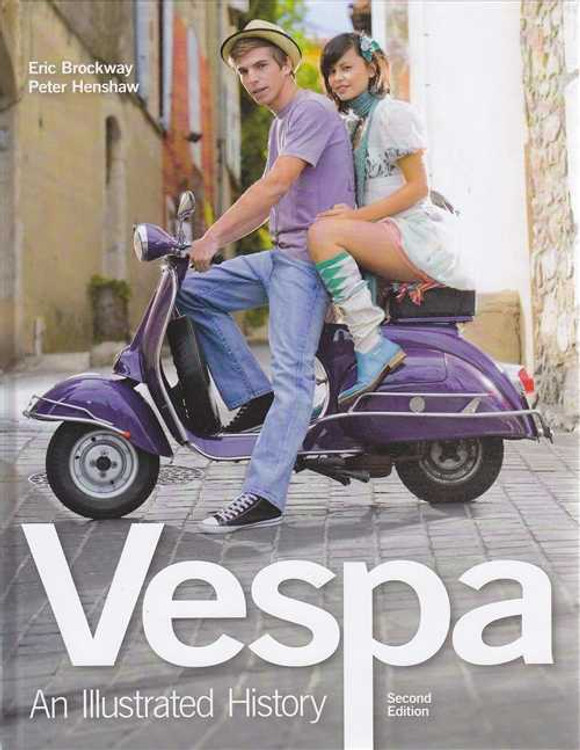 When introduced to Britain in 1949, the Vespa was an entirely new type of vehicle and hugely successful — and 60 years later the stylish little scooter is still winning hearts. Eric Brockway's best-selling volume, originally published in 1993, tells the story of Vespa in Britain, and in this updated form also includes colour coverage of all the modern retro-style Vespas, from the 50cc ET4 to the GTS 250, as well as the final PX two-strokes.

The book is a tribute to the personality, individuality and style of the world-famous scooter, explored through original advertisements, publicity shots, factory pictures and numerous offbeat photographs. Celebrities and girls are well-represented on the pages but there is also plenty of technical interest to satisfy mechanically minded enthusiasts.

No-one knew more about Vespa than Eric Brockway, who joined Douglas, the British importer, at the very beginning and spent 33 years there. Following the author's death, Peter Henshaw has provided additional material for the second edition. He is a freelance journalist and contributes regularly to Twist & Go, Motorcycle News and Motorcycle Sport & Leisure.

MSRP:
Now: $129.95
Was:
Sales of over half a million made the MGB Britain's most successful ever sports car. And the truth is that, more that three decades after production ceased, the MGB's classic lines,...

Bonnie - The Development History Of The Triumph Bonneville (2nd Edition)

MSRP:
Now: $495.00
Was:
By: Philip Porter . Description Rarely, if ever, has a car had a greater impact than the Jaguar E-type. Not only did the E-type's arrival in 1961 make a huge impression on the motoring world, but it...

MSRP:
Now: $99.99
Was:
By: S. Biancalana, Michele Marchiano . ENGLISH EDITION New, updated and enlarged version of the first edition published in 1996, on the occasion of the Fiftieth anniversary of the celebrated...

MSRP: $49.99
Now: $29.99
Was:
By: Valerio Boni . In the fashion capitols of the world, the Vespa motorscooter is a necessary lifestyle accessory. And those who are not Vespa owners are Vespa admirers. From the classic romance of...

Vespa - The Story of a Cult Classic in Pictures